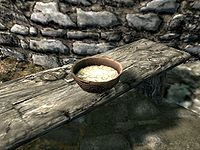 Powdered Mammoth Tusk is only available in random loot. It cannot be made from mammoth tusks.

In terms of combinations of two ingredients, Powdered Mammoth Tusk can be combined with 55 other ingredients.

The only way to make this ingredient become available from apothecary merchants is to unlock the Merchant perk (requires level 50 Speech), at which point it becomes considered an "uncommon" ingredient.

There are also no guaranteed samples of powdered mammoth tusk in the base game, so the only remaining way to obtain them is in random loot. However, the chances are generally small of this ingredient appearing in any given location. The best bets are: