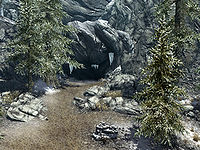 Shadowgreen Cavern is a small cave northwest of Solitude, which is home to leveled spriggans and animals. 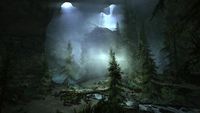 Although the marker on the map makes it seem like the cave is located in the mountains near the Thalmor Embassy, it is actually farther north, close to the coastline. This is an artifact of the map's angle and how far north the cave is, which you can see by moving the map left and right: the cave marker doesn't move at the same rate as the embassy and other nearby markers. To get to the cave, follow the road from Solitude that heads towards the Dainty Sload and the Solitude Lighthouse, but stay on the main road as it curves north then west around the mountain.

There are five snowberry bushes growing along either side of the path, which is marked by the piles of rocks leading from the road up to the entrance, and three clusters of blisterwort fungus around the entrance.

A short path inside leads to a large natural cave with a central rock formation filled with vegetation, with a large number of monarch butterflies and blue butterflies during the day and luna moths and torchbugs at night. There is a stream running from south to north across the cavern feeding into a pool of water, and holes in the ceiling letting in natural light. There are several rabbits running around, and various types of fauna in the cavern.

As you pass under the arch formed by the fallen pillar, you will see one of a pack of three wolves wandering where the path splits at a T-junction; the others can be found farther along the path to the southeast. Along the eastern edge of the path after the arch there are two red and one purple mountain flowers. To the west, around the back of the pillar, is another red mountain flower, another two between it and the path to the south, and another two behind the tree to the west. To the west is a ledge, and to the south you will find a rotten tree stump with an apprentice-locked chest inside. As you head back east to the main path, there is another rotten stump on the right with some mora tapinella growing on it.

While on the plateau, head to the northeast edge and then look down; you should spot a chest on a ledge with no apparent way to reach it. It can be reached by facing the widest part of the ledge and using the Whirlwind Sprint dragon shout. It can also be reached with some luck by heading to the end of the bridge, facing east, and sprint-jumping off. This can be difficult, as there is a protruding section of the wall to the left, which means you cannot aim along the ledge, and must instead take a few steps towards the middle of the bridge and aim for the smallest edge. If you miss the ledge itself and catch the rocks just below it, you will need to turn back east to jump up. To get down from the ledge, you need to face the plateau and use whirlwind sprint, or jump and hope to hit the path running up the side of it. If you miss the jump, you might still survive the fall to the ground below, but will take heavy damage.

At the end of the bridge off the plateau, drop down to the west to find another red mountain flower and an adept-locked chest. Go through the bush and hug the wall, then make a steep drop to another ledge (it will hurt, but should not kill you). This ledge has a moonstone ore vein, a lootable skeleton of an unfortunate person, a random helmet, a medium coin purse, and a random war axe. Another red mountain flower and a blue mountain flower can be found here. To leave, jump into the pond, then follow the path back out.