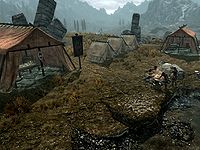 Whiterun Imperial Camp is an Imperial camp in Whiterun Hold, located east of Rorikstead and far west of Whiterun. 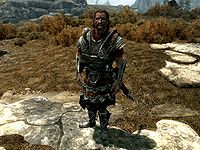 A bugged Legate Cipius, alone in the wilderness where the camp should be

The commanding officer of this camp is Legate Quentin Cipius. Unlike other military camps, you will never be welcome here, as it will only exist if the Stormcloaks have taken Whiterun in battle. The soldiers will draw their weapons and tell you to leave when you approach the camp. If you linger for too long, they will attack you. Like similar Imperial camps that only exist when the hold has changed hands, it has neither a quartermaster or any horses.

There are six soldiers in addition to the Legate and wounded. They are all armed with imperial bows and swords, and all wear complete sets of imperial light armor. The camp is situated around a central campfire on the banks of a shallow pond. There is a cooking spit over the campfire, with an anvil and a grindstone beside the fire. To the north is the command tent, containing an end table and a large table covered with a map of Skyrim showing the progress of the civil war and the various forts and cities held by each side. This is where the Legate spends most of his time. There is a row of three small tents to the right of the command tent, each containing a bed roll. South of these tents is the Legate's tent, containing an owned single bed, with an unlocked chest at the foot of the bed and an end table beside it. To the right of the tent is a workbench, and farther to the right is a hospital tent, containing three bed rolls occupied by wounded soldiers and a low table holding two random potions of healing. Outside to the right is a table with a built-in alchemy lab, and behind the table are some barrels.