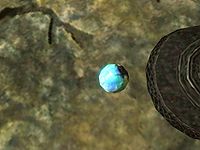 The Small Pearl is an Alchemy ingredient, and one of the rarest in the base game. Small Pearls, as well as Pearls, are only available as already-harvested samples in the original version of the game. The only shellfish found in Skyrim are Clams, and unlike in previous games they do not produce any size of pearl. However, if Dragonborn is installed, Pearls and Small Pearls can be harvested in Solstheim from Pearl Oysters.

In terms of combinations of two ingredients, Small Pearls can be combined with 49 other ingredients.

The remaining way to obtain Small Pearls is in random loot, but the chances of one appearing in any given location are generally small. The best bets are: