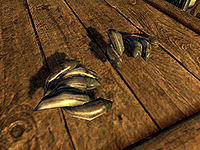 Bear Claws are dropped by bears, in addition to a bear pelt.

In terms of combinations of two ingredients, Bear Claws can be combined with 55 other ingredients.

3 guaranteed samples can be found in 3 different locations:

With the Dawnguard add-on 2 more guaranteed samples can be found in 2 different locations:

With the Dragonborn add-on 1 more guaranteed sample can be found in 1 different location:

Remaining ways to obtain already-harvested bear claws all have relatively low probabilities. The best bets are:

Bear claws are dropped by all varieties of bear, including cave bears, snow bears, and the Ursine Guardian.