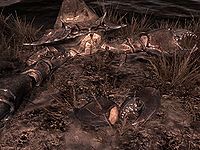 In terms of combinations of two ingredients, Mudcrab Chitin can be combined with 55 other ingredients.

8 guaranteed samples can be found in 6 different locations:

Remaining ways to obtain already-harvested mudcrab chitin all have relatively low probabilities. The best bets are:

All mudcrabs, including the Mudcrab Guardian Spirit, will drop one or two samples of mudcrab chitin, depending on their size.