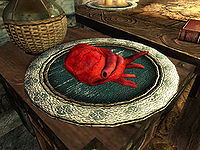 Daedra Hearts are collected from slain Dremora. In addition to their alchemical uses, they are also a key ingredient in making Daedric armor and weapons, both at standard forges and at the Atronach Forge. These multiple uses, coupled with their rarity, make them extremely valuable items. Although Daedra hearts are rare, nearly all of their sources do respawn, meaning that obtaining sufficient Daedra hearts for creating Daedric gear may be difficult, but should never be impossible.

In terms of combinations of two ingredients, Daedra Hearts can be combined with 53 other ingredients.

It is categorized as a rare ingredient, meaning that most apothecary merchants have a 21% chance of carrying 1-4 samples. In addition, it may be randomly found only in rare-type apothecary's satchels. Other possible locations for already-harvested samples include:

Daedra hearts are dropped by all varieties of Dremora, i.e., Dremora Caitiffs, Churls, Kynreeves, Kynvals, Lords, and Markynaz, as well as named Dremora, namely Velehk Sain. Some places where Dremora can be encountered and killed include:

The ReaperDG and Ebony Warrior are each guaranteed to drop one sample.

The key difference between Daedric and ebony equipment is that the essence of a Daedric creature is bound into the equipment. Daedra hearts provide that essence, and therefore are critical for making all varieties of Daedric gear. Specifically: