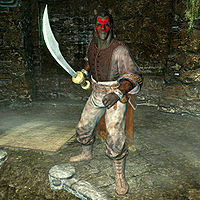 Velehk Sain is a Dremora pirate that is trapped in the Planes of Oblivion by a binding spell. He will only be encountered when nearing the completion of the Forgotten Names quest, during which you will be able to summon him in The Midden Dark.

Velehk isn't really well-armored, as opposed to other Dremora who are usually clad in Daedric armor. Instead, Velehk wears Hammerfell garb and a pair of Redguard boots, and like most pirates, he is equipped with a scimitar, and has another spare scimitar in his inventory.

As part of the quest, Velehk will ask to be released. You can either accept his bargain and release him, or you can simply kill him. If you release him, he will give you his treasure map which leads to a stash of magically hidden treasure. If you opt to kill him instead, he shouldn't be too much of a problem, considering he is not leveled and is poorly equipped. Like other Dremora, he will drop a daedra heart, in addition to his equipment mentioned above. Note that by killing him, you will be denied access to his treasure.

When first summoned, he will ask, "Where am I? You! Out with it, then." When you answer that you're beneath Winterhold College, specifically in The Midden, Velehk will say, "Ah, I was beginning to think the day would never come. So you broke the binding spell, did you? Matters little. Their souls are trapped in Oblivion all the same, and here I stay." You can tell him that he's going back where he belongs, to which he'll reply, "Where I belong is back aboard my ship, on the Abecean. You've no hope of defeating me, pup. Don't bother. Why not broker a bargain, instead?"

You have two dialogue options, the first of which is to refuse by saying "Not a chance." He will reply, "Have it your own way, meat." and turn hostile. The second option is to say that you're listening, in which case he'll put forth the terms of the bargain: "Those kids are dead anyway. Killing me won't bring them back. I, on the other hand, have done quite a bit with my time on Mundus. Release me and I'll share a bit of my wealth with you." Asking him what wealth this is will have him explain, "Years back, I had to ferret away some booty nearby. We'd sunk an Imperial Galleon off the coast. Good plunder, but we needed to travel light. We stashed what we couldn't carry, and I hid it with a trick I know. I can point you in the right direction, and we'll each go our separate ways." If asked, he will also tell you how you could even release him. "Names have power, lad/lass. You should know by now. Just say 'Velehk Sain, I release you.', and 'Poof!', I'm on my way."

You will be presented with two dialogue options. The first option will have him disappear while the second will turn him hostile and render the treasure inaccessible:

"Velehk Sain, I release you."
"There's a smart lad/lass. Check the map. The loot's hidden there. It'll show itself when you get near. See you on the other side, mortal."
"Velehk Sain, I banish you to Oblivion!"
"Clever try, scab, but it won't be that easy!"