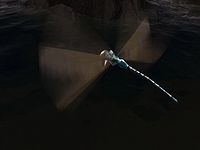 Blue Dartwings can be acquired by catching dragonflies. Only half of dragonflies have blue wings; the other half yield orange dartwings. The two types of dartwings share the Fortify Pickpocket alchemical effect.

In terms of combinations of two ingredients, Blue Dartwings can be combined with 42 other ingredients.

Dragonflies spawn at 769 sites, in 138 different locations, typically near bodies of water (rivers, lakes, or ponds). Each spawning site can generate a random mix of up to 10 orange- and blue-winged dragonflies. The dragonflies are spawned between 5am and 8pm; some of the spawning sites instead generate torchbugs at night. They will fly away after a few seconds so you need to be quick to catch them.