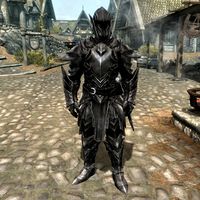 The Ebony Warrior in Whiterun 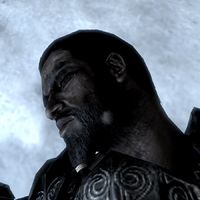 The Ebony Warrior is an extremely powerful opponent who can only be encountered when you reach level 80. At that point, he will track you down, which starts the quest The Ebony Warrior.

In addition to his already high stats, all of the pieces of equipment the Ebony Warrior carries have high level enchantments which provide him with even more resistances and damage increases. He will always be equipped with the following items: Ebony Armor of Regeneration, Ebony Boots of Frost Suppression, Ebony Gauntlets of Extreme Wielding, and an Ebony Helmet of Waterbreathing, as well as a Necklace of Shock Suppression and a Ring of Peerless Wielding.

He also carries and can use an Ebony Sword of the Vampire, an Ebony Shield of Fire Suppression, an Ebony Bow of Winter with thirteen ebony arrows, and five Potions of Vigorous Healing.

In combat, he is able to cast the spells Close Wounds, Command Daedra, Conjure Storm Atronach, Frost Cloak, and Ironflesh. Furthermore, he can use the Unrelenting Force and Disarm dragon shouts. He is completely immune to all forms of paralysis, Vampiric Grip, and the Ice Form and Bend Will shouts. He cannot be ragdolled by the Cyclone shout, though he will take health damage from it. He is also completely immune to the Wabbajack but can be killed instantly by Mehrunes' Razor. His elemental resistance perk combined with the enchantments on his boots, necklace, and shield make him essentially immune to spell damage but as long as his shield is unequipped he will be somewhat susceptible, particularly to fire. He is susceptible to the knockdown effect from Shield Charge, and can be ragdolled by a werewolf's moving and sprinting power attacks.

Upon reaching level 80, he may approach you in one of the major cities, telling you, "The time has come." You can then ask him what he means by this, or if you exited the conversation when he tried to talk to you, you will be able to ask him what he was saying before. Both options will lead to the same response with him saying, "I have done all that can be done. There is nothing left. No quests to be undertaken. No villains to be slain. No challenges to face. Except for you. You are my last challenge. Only you can send me to Sovngarde with honor. Make your preparations. When you are ready, come find me at my last vigil."

When you meet him at his last vigil, he will not acknowledge your motive for coming to see him, and will only respond with generic comments until you attack or provoke him. After doing so, he will fight back, occasionally using taunts such as "Show me you are the hero they say you are!", "I am the Ebony Warrior!", and "Kill me already!" Other combat dialogue includes: "That's the spirit!" and "Hit me harder!", which he may say when you attack him. Upon dying, he will say: "At last. Sovngarde..."

Once you have defeated him, you may loot his body for his fully enchanted set of equipment and a full collection of six flawless gems, a human heart, a daedra heart, and a filled black soul gem.

This Skyrim-related article is a stub. You can help by expanding it.
Retrieved from "https://en.uesp.net/w/index.php?title=Skyrim:Ebony_Warrior&oldid=2640398"