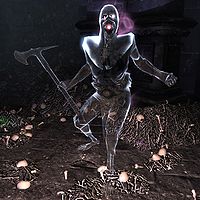 The Reaper is the shadowy figure of an executioner with burning red eyes. He uses an iron battleaxe to attack in addition to a spitting attack similar to that of the Afflicted. In order to fight the Reaper, you must acquire a complete set of three Reaper gem fragments, which are scattered in chests of the Soul Cairn. You then place them at the altar in the Reaper's Lair. Doing so will summon the Reaper along with a few bonemen.

He wears a unique set of unlootable robes, hood, and bracers. When defeated, he drops three black soul gems and a Daedra heart.