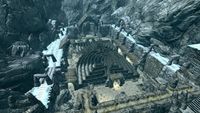 Shalidor's Maze is a section of Labyrinthian. Its entrance is on the east side of Labyrinthian's outdoor ruin, on the ground level, just east of the mound-like structure containing the ruined dragon priest monument. Despite its name, it is not actually a maze, in that you cannot get lost in it as there are no intersections where you have to decide which way to turn.

There is a novice-locked chest and a large urn just outside the entrance. See Labyrinthian for full details of the surrounding ruin.

You enter into a corridor descending a flight of stairs to the north. After a couple turns, the corridor opens into an open-air courtyard with a large stone wall ahead. There is an arch through the middle of the wall, and stairways up to the top on either side of the courtyard. In front of the arch, there is a large flower bed and a tree growing on either side. This flower bed, along with more around the courtyard and hanging from the walls and arches outside the maze, contains plants that are listed in the table below. Taking either stairway leads to the top of the wall and provides a good view of the maze beyond the arch, also giving you access via Whirlwind Sprint to the top of the walls surrounding the maze and courtyard. These walls can also be reached by jumping around the obstructing rock face on the western side. On the western wall, near the northwest corner of the area in an easily missed alcove, is an unlocked chest. To easily locate this chest, after you pass the sloped part of the wall, walk under the first square arch then stop just before the next one; the alcove will be on your left. On the eastern wall, there is another alcove with a lootable skeleton, a leveled weapon (up to Daedric in quality), and a random shield. The easiest way to reaching this alcove is to continue around from the west wall, climb the peaked roof over the word wall, and keep going. The two (western and eastern) alcoves are almost directly opposite each other.

Beyond the arch near the entrance is another courtyard with a raised circle. Atop the circle is a burnt corpse holding a filled soul gem and a note. By the corpse are four smaller circles, each projecting a staff, namely, staves of Fear, Firebolts, Magelight, and Repulsion. The staves represent spells from the schools of Illusion, Destruction, Alteration, and Restoration, respectively. On either side of this area are two more flower beds, each containing a tree and plants. Behind the staves is an archway to the start of the maze. You can walk all the way around the outside of the maze to reach the word wall at the other end of the maze, which teaches part of the Dismay shout.

Entering the maze from the beginning, you pass two shutters that contain four loose gold coins and a random filled soul gem. The path heads north to a turning to the east; here, it is barred. To the right of the bars is a shutter that contains a scroll of Magelight. There is a Sigil of Alteration on the north wall, which requires you to cast Magelight on the sigil to lower the bars. You can use a scroll, staff, or spell to cast Magelight; all will work. Follow the linear path through this part of the maze, opening the shutters as you go. Some of them hold items including a flute, two pieces of charcoal, or a loose gold coin, but most hold nothing. You will encounter a couple skeevers in this part of the maze. When you reach the end of the path, you will find the Sigil of Destruction, which requires you to cast Firebolt or another targeted Destruction spell. When you do, the floor will open and allow you to drop and continue onward.

The shaft has three beams across it to help break your fall. Growing from these beams are hanging moss plants. Once you reach the bottom, the path continues to the south and enters a typical catacomb-style area. At the crossroads, the path to the east is a dead end. The southern path ends in a shaft similar to the one you dropped down earlier, with beams across it and a trap in the ceiling. Heading west leads towards a stone wall that rises as you approach to reveal a spiral staircase leading up and out of the maze on the west side, opposite a waterfall. Take the stairs and head north to the word wall and the second entrance. This end is blocked by bars, similar to the southern end; this time, the nearby wall is marked with the Sigil of Illusion, which requires the use of any targeted Illusion spell to open the way, such as Fear. In this section of the maze, you will find the following items in the shutters: a horker tusk, bloody rags, a piece of bent Dwemer scrap metal, an emerald, an amethyst, and a garnet together, a centurion dynamo core, and a Spell Tome: Heal Other. You will encounter an ice wraith and two skeevers. The skeevers might be found already dead, killed by the ice wraith. You will also pass a dead skeleton that can be looted, and a copy of the Conjuration skill book Liminal Bridges next to it. At the end of the path, the wall bears the Sigil of Restoration, which requires the use of a targeted Restoration spell or use of the Staff of Repulsion. The drop beyond this barrier is to the shaft opposite where you landed last time. Directly ahead will be a sphere of magical energy blocking the way. This sphere will only appear if all four sigils have been activated.

As you approach the sphere, you will be teleported to a circular platform with a leveled dremora, who will summon a flame atronach and shoot firebolts at you. Fight the dremora, and once he loses a certain amount of health, you will be teleported back to the entrance to Shalidor's Maze, as if you had entered the entire area again. The dremora may or may not appear in front of you (depending on whether or not you killed him in the magical sphere), but there will always be two leveled atronachs beyond the arch. Both will immediately attack. Once they are all defeated, don't forget to loot them both for their salts. If the dremora appears as well, killing him will enable you to loot a Diadem of the Savant, as well as a daedra heart and a random weapon. The Diadem reduces the magicka cost of all spells by 5%. If you want this item, it is recommended to let him survive the earlier fight in the magical sphere. Alternatively, if you kill him quickly during the Trial of Conjuration, just loot the diadem from his corpse there, then attack his corpse with a melee weapon to teleport yourself back out (see bugs). 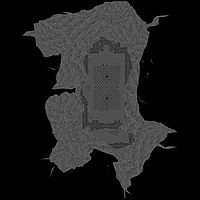