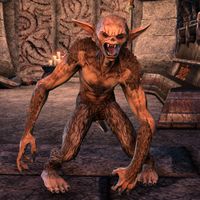 Scamps are one of the lesser sentient Daedra of Oblivion, who often enter into the mortal world to cause mischief and carry out errands for their Princes. They are weak, rather dull (described as semi-intelligent),[1] and cowardly, and are easily defeated except in large numbers. For the greater Daedra, scamps are useful minions, as their nimble hands can carry and manipulate objects, and they are just tricky enough to be cunning opponents in combat.[2] They are most commonly associated with Mehrunes Dagon,[3] though they also serve Molag Bal, Sheogorath,[4] and Sanguine.[5]

Many varieties of scamps exist, including the weaker Stunted Scamps and fiery Magma Scamps of Mehrunes Dagon, the Stonefire, Mind-Shriven, Trove, and Cunning Scamps of Molag Bal, and familiars summoned by mortals. The Undaunted also trained scamps to wear packs to carry their valuables.

This Lore-related article is a stub. You can help by expanding it.
Retrieved from "https://en.uesp.net/w/index.php?title=Lore:Scamp&oldid=2577153"