Reymon Ebonarm (also called Ebonarm or the Black Knight) is the God of War and the companion and protector of all warriors. He is said to ride a golden stallion named War Master, and is accompanied by a pair of huge Ravens. Ebonarm's name refers to the Ebony sword fused to his right arm, a result of the wounds he suffered in titanic battles of the past, and he is never seen without a full suit of ebony armor. He is described as bearded, tall and muscular, and as having flowing reddish blonde hair and steel blue eyes. Emblazoned on his ebony tower shield is the symbol of a red rose, a flower known for blooming on battlefields where he appears. According to legend, he appears on the field of battle to reconcile opposing sides and prevent bloodshed.[1][2]

In the tale of King Edward, Ebonarm was the one who gave the mortal Sai the gift of immortality when he died in battle, in return for taking on the role of the God of Luck. Sai did Ebonarm's bidding for many years, but when he fell in love with a woman named Josea he became lax in his duty. A host of gods visited him, Ebonarm taking the form of a black knight, and demanded he leave his family. Ebonarm demanded he fix the problems he had caused staying in one area for too long, which took Sai one hundred and fifty years to do.[3]

He is an enemy of all of the Daedric Princes except Sheogorath and Jyggalag, as well as the Temple of Stendarr and the Cabal, a subfaction of the Mages Guild. He is allied with none, although he does lead the Citadel of Ebonarm, consisting of mosques and a knightly order known as the Battlelords. Holy anvils dedicated to Ebonarm can be found throughout the Iliac Bay region, and most Fighters Guild guildhalls in the Alik'r Desert actually serve as mosques dedicated to him.[4][5] Dunmer often swear upon the "soul of the Black Knight".[6]

There is a large, bare field in Hammerfell where Ebonarm appeared before a great battle. He used his divine power to make both warring leaders end their fight and return home. It is said in the nearby village of Granitsta, that the only piece of foliage on the field, a rose bush was where he stood that day.[2]

The Khajiit acknowledge an unnamed dark spirit, born from Azurah's grief after the death of Fadomai and Lorkhaj, that sometimes appears in songs as a black panther, a warrior in ebony armor, or a hidden sword.[7] 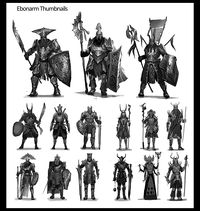