Frandar do Hunding Hel Ansei No Shira, commonly known as Frandar Hunding, was a Yokudan warrior-prince and is considered to be the most accomplished Sword-singer and master Ansei in history. Born in 1E 720 [nb 1] in the province of High Desert in Yokuda, he is best remembered for being one of the first Yokudans to settle in Hammerfell, giving birth to the Redguard people in the centuries that followed. He is also revered for developing the "Way of the Sword", a martial philosophy on blade mastery.[1][2]

Frandar is the only "given" part of his name: "Hunding" is the name of the region of his birth; "No Shira" means person of noble birth and "Hel Ansei" is his title of Sword Sainthood in the language of Yokuda.[2]

Frandar's ancestors reach back to the beginning of recorded time in the High Desert province, living as artisans and mystics. Much his family lived through constant civil wars between various provincial lords, warrior monks, and brigands all fighting each other for land and power. Frandar's grandfather led many of the battles for the unification of Yokuda as a retainer of Mansel Sesnit, the Elden Yokeda.[2][3]

Prior to Frandar's birth, Sesnit was successful in unifying much of the empire. Frandar's early life came under the rule of Sesnit's successor, Emperor Randic Torn, and was relatively peaceful. When Frandar was 14 years old his father died, leaving him to support his mother and four brothers. Given his prowess with the sword at such a young age, this was not difficult and his services came in great demand as a guardian and escort. When Frandar was 17, Randic Torn died and plunged the empire once more into a vicious civil war. At the peak of the strife, Frandar had become a sword-singer and master Ansei. He pursued the ideal of searching for enlightenment through the path of the Sword, so duels and tests of skill were commonplace. As his fame as a swordsman grew, so did the number of people wanting to challenge him to gain their own fame.[2]

By the time he was 30 years old, he had fought and won more than 90 duels, killing all his opponents. Frandar has gained such skill and mastery that he stopped using real swords and began using the Shehai - an unstoppable sword formed out of his own spirit. With his Shehai, he traveled the land killing bands of brigands and wandering monsters. He also enlisted in the many battles and insurrections of the period.[2] Around this time he also sired his only son, Divad, but was absent throughout much of his life.[1][2] 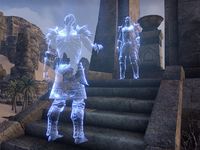 A recreated vision of Divad scolding his father for being a coward in the cave of Mt. Hattu

Upon defeating Lord Janic in his ninetieth duel, Frandar finally believed himself to be invincible and retreated to a cave on Hattu Mountain to live the life of a hermit while formulating his philosophy of the "Way of the Sword". These writings eventually became the Book of Circles, which he wrote over the period of 30 years.[2][3]

In 1E 780 his life of peace was interrupted by a group of sword-singers, including his son, who came seeking his leadership in what would become a war against the Emperor Hira.[1] Frandar was originally against any conflict with the emperor, despite the death of his wife at his hands. He wanted to negotiate with Hira in order to save the countless lives that would no doubt be lost in a war, a stance that Divad strongly disapproved of. Frandar struggled with the burden of leadership and the choice of either fighting against the emperor which would result in exile or submitting to him.[4] Scribes of the time reported bright flashes of light and angry voices from within the cave as Frandar and Divad argued. After five hours both emerged from the cave and Frandar reluctantly agreed to lead the rebellion against Hira in what became known as the War of the Singers.[1]

Hunding devised a strategy he called the "Hammer and Anvil", and eventually won a decisive victory against the emperor at the foot of Hattu Mountain. Less than twenty thousand singers survived, but over three hundred thousand of Hira's army were killed.[2] Despite their victory, Frandar mourned the dead and was still conflicted if he had made the right choice.[4] After the battle, Hunding and the remaining singers realized they were no longer welcome in the land, and set sail from the port city of Arch. The first of the Ra Gada, or "Warrior Wave", they eventually arrived in the new land they later named Hammerfell.[2]

Upon arriving in Hammerfell, Frandar and his army discovered vast numbers of giant goblin strongholds littering the sands. Frandar refused to co-exist with the Flint-Tooth tribe on their new homeland, and rallied his army to slay the beasts. During one of the bloodiest battles of the campaign, Frandar was killed and Divad rose to take command of the Ra Gada and avenge his father.[5] After his death, Frandar was laid to rest in the sacred Hall of Heroes, where he would eventually be joined by his son.[6]

In the centuries that followed after his death, Frandar Hunding became one of the most revered figures in Redguard history. Frandar's people honored him so much that his influence is apparent generations later. The city of Port Hunding on Stros M'Kai was named in his honor and is home to a vast statue of him looking out towards Hunding Bay. Many believe that the goblins of Stros M'Kai were banished beneath the earth thanks to him.[7][8] Throughout the Alik'r Desert are numerous shrines dedicated to Frandar.[9] However his most lasting legacy was without question his tome of martial knowledge.

The Book of Circles was written by Hunding in order to pass on his life long insights and knowledge. For Redguards, it is an enormous part of their culture and everyday life.[2][10][11] Reading from it was abandoned some time in the middle of the First Era until Derik Hallin, the only Ansei at the time, brought back the "old ways" and instructed every warrior to read the book.[12][13] The people of the Alik'r celebrate "Dirij Tereur" every year on the 5th of Frost Fall, a holiday honoring Frandar Hunding, and festivities typically include readings from the book.[14]

Each household in Hammerfell has an alcove by its hearth just big enough to hold a copy of the Book of Circles in honor of Hunding.[2][10] The book is still highly regarded as a treatise on blade mastery and even other experts at the skill refer to it. It is said to include the principles one must master in various seasons of life, and "thirty-eight grips, seven hundred and fifty offensive and eighteen hundred defensive positions, and nearly nine thousand moves essential to sword mastery".[15][16] During the Three Banners War, Imperial forces stole four of the original scrolls entombed within Frandar's crypt in the Hall of Heroes. The Vestige recovered the scrolls at Frandar's request and received his blessing to enter the Chamber of Passage and deal with the invaders.[4]

The following are several quotes attributed to Frandar Hunding: