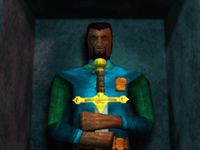 "Be resolute, fear no sacrifice, and surmount every difficulty to win victory." —Hoonding’s prayer stone

The HoonDing, also known as Hoonding[1] or The Make Way God, is the Yokudan spirit of 'perseverance over infidels'. The HoonDing has historically materialized whenever the Redguards need to 'make way' for their people.[2][3]

In the First Era, HoonDing is first known to have manifested as an avatar by Diagna. Diagna was instrumental to the defeat of the Sinistral Mer, as he brought orichalc weapons to the Yokudan people to win the fight. In Tamriel, he led a very tight knit group of followers against the Orsimer of the first Orsinium, presumably the Order of Diagna during the Siege of Orsinium, during the height of their ancient power.[2] He had then faded into obscurity, and is now little more than a local power spirit of the Dragontail Mountains.[4]

Frandar Hunding was also an aspect of HoonDing.[1][5] During the arrival of the Yokudan people to Tamriel, he led them against Malooc the Horde King, the enemy god of Ra Gada who led an army of giant goblins against the Redguards in the First Era. Then HoonDing appeared to drive out the goblin force all the way to the east.[4]

During the Tiber Wars, HoonDing was said to have been "a sword or a crown, or both". This refers to either or both Crown Prince A'tor, the heir to the throne who was transformed into the Soul Sword, and/or Cyrus, a Crown who wielded the Soul Sword. Together, they could have also been an aspect of HoonDing.[4]