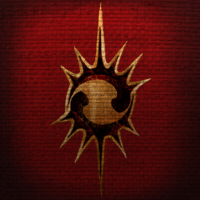 Jyggalag, the Prince of Order,[1][2] is a Daedric Prince whose sphere represents logical order and deduction; his great library once contained a logical prediction of every detail of the world and of every action that would ever take place on Mundus or Oblivion, long before they actually happened.[1] Until the Third Era, the Prince was virtually unknown in Tamriel beyond his name,[3][4][5] having been cursed in antiquity to become the Prince of Madness, Sheogorath.[6] After the events of the last Greymarch, Sheogorath and Jyggalag are no longer the same Daedric Prince, however they are still connected in other ways.[UOL 1]

It is said that the Daedra fear wisdom and order, and for his similarities to Jyggalag's principles,[7] they feared Sotha Sil above all others.[8] Apostles of Sotha Sil noted that of all the Daedra, only the "Gray Prince of Order" knew his nature, and went mad in the knowing.[8]

Jyggalag commands his own Daedra, the Knights of Order, which are spawned from obelisks summoned by his followers, the Priests of Order. Together, they constitute the Forces of Order.[9] He is viewed as stern,[4] bleak, and colorless,[10] with him and his soldiers lacking originality.[11]

In the time before recorded history, Jyggalag's realm of perfect order expanded across the seas of Oblivion, and the other Daedric Princes had grown fearful and jealous of him. They cursed him to live as Sheogorath, the incarnation of the thing he hated most: madness—the essence of chaos itself.[6][2] He was, however, allowed to return to his true form at the end of every era in order to retake the Shivering Isles from his mad alter-ego in an event known as the Greymarch. But once a Greymarch is complete, Jyggalag transforms back into Sheogorath, starting the cycle again.[6]

Haskill, Sheogorath's chamberlain, claims to be a vestige of a mortal who mantled the Madgod in a past event.[12] The exact details of this interaction remain unclear (as Sheogorath appears keen to avoid the subject), but Haskill claims the pair "go back to the beginning", and the incident somehow involved Jyggalag.[12][UOL 2]

There came a time when the Prince of Order decided someone was needed to take care of his realm's mundane affairs, and the task fell upon Dyus of Mytheria, who became Jyggalag's chamberlain and the keeper of his Great Library.[1][UOL 2] Dyus performed all the tasks Jyggalag found distasteful.[UOL 2]

Upon taking over the realm, Sheogorath banished or killed every aspect of Order that remained in the Shivering Isles, save for Dyus. The Great Library was set aflame, as the Madgod believed that "personal choice defied logical prediction". Yet, he allowed Dyus to remain, for he was unwilling to destroy the knowledge the chamberlain possessed. Forbidden to die, Dyus was locked away for all time in the remnants of the once proud library.[1]

"Once, I ruled this Realm, a world of perfect Order. My dominion expanded across the seas of Oblivion with each passing era."
—Jyggalag

In 3E 433, a doorway to the Shivering Isles appeared in the middle of Niben Bay, The Champion of Cyrodiil entered the realm to find that Sheogorath was searching for a mortal Champion.[13] The next Greymarch was about to begin.[10]

Before long, Knights of Order, soulless servitors of Jyggalag, began appearing in the Isles, drawn to strange obelisks dotting the realm. [14] Meanwhile, Sheogorath revealed his plan: the Champion would break the cycle of the Greymarch by becoming Sheogorath (or at least, mantling his powers). The Madgod believed this would make things "different this time around", as the "Rules" of the Greymarch necessitated his absence (though he eventually confessed the truth of his dual nature to the Champion).[10]

The Greymarch began with an assault on the Fringe, the gateway to the Shivering Isles.[15] Due to the actions of the Champion in retaking the Fringe, the Forces of Order next targeted the Wellsprings of the Isles' Daedric guardians.[16] Sheogorath celebrated this development, as it was not a tactic Order had tried before.[10] The Champion dealt with this new threat, but it was a hollow victory, as Sheogorath soon transformed into Jyggalag.[16][17]

Chamberlain Haskill still held out hope, however, for if the Throne of Madness was not empty when Jyggalag arrived, there was still a chance to prevail. He took the Champion to see the captive Dyus of Mytheria, who suggested a new Staff of Sheogorath, imbued with the power of the realm, would allow the Champion to occupy the Throne (though true to form, he also predicted failure was "a certainty"). With the chamberlain's assistance, the Champion created the staff and assumed the powers of the Madgod.[1][17][18]

This development came none too soon, for the Forces of Order were already breaching the walls of Sheogorath's Palace. Before long, Jyggalag himself appeared and slew the remaining guards, leaving only the new Madgod standing between him and the end of another Greymarch. The Prince of Order fought hard, but was unable to best the Champion. Ultimately, Jyggalag yielded, conceding the Shivering Isles, and congratulating the Champion on breaking the cycle of the Greymarch and on becoming the new Prince of Madness. The Prince of Order then took his leave, returning to roam Oblivion once more.[19] Dyus presumed he may have sought revenge on those who cursed him, or pursued loftier goals, perhaps never to return to the Shivering Isles again.[UOL 2] Regardless, Jyggalag will one day reassume his role as the Prince of Order, with unknown ramifications for the complicated and opaque balance of power within Oblivion.[UOL 3]

The memories of Jyggalag drove the Prince to madness

Though Sheogorath was very knowledgeable about Jyggalag's motivations and involvement in previous Greymarches,[10] sometime in the Fourth Era,[nb 1] he suppressed the memories of his previous life as Jyggalag as they caused even him to go mad. The Dunmer Talym Rend was able to defeat Sheogorath at his own game when he forced the Madgod to relive these memories.[20]

In 4E 201, a mage named Thoron came into possession of the Sword of Jyggalag. The sword instructed Thoron to invoke a ritual that tore the veil between Tamriel and the Shivering Isles, and ultimately wished to destroy the isles much like its master had done in past Greymarches. The Last Dragonborn put an end to the ritual by killing Thoron, and came into possession of the sword.[21]

The Sword of Jyggalag is a Daedric artifact created by Jyggalag, the Daedric Prince of Order. It takes the form of a giant claymore of perfect symmetry, made of a silver crystalline material that is similar to the longswords wielded by the Knights of Order. It has been compared to the Staff of Sheogorath, although it is unknown if the sword holds as much symbolic power. It has a unique enchantment that allows those that gaze upon its edge to see the past, present, and future flow as one.