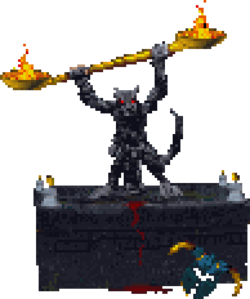 Ius the Extremely Agitated is the God of Animals in some folklore, who has statues throughout Valenwood and parts of Hammerfell and Elsweyr. These statues depict Ius as a little misshapen humanoid carrying a rod with scales on each end.[1][2][UOL 1]

The tale behind the rod he carries states that one day an evil farmer decided to kill all of his animals and have a big party. As the story unfolds, animal after animal is killed and prepared for a big meal. Lastly, the farmer comes to the ox and prepares to slit its throat. The ox, not wishing to be anybody's dinner, prayed very vocally (in the form of a moo) to Ius. Then, Ius appeared carrying a rather large set of balance weights and, without explanation, ate the farmer and vanished. Ever since that day, Ius has always been portrayed as carrying a large set of scales with him. Local Ius worshipers are said to neither know nor care about the reason behind the scales.[1]

Another tale of Ius is that before the age of Pelagius Septim III, there lived a wombat who was the pet of Lady Greelina, daughter of the Lord Prufrock of Rockpark. Unfortunately, it was a time of great sorrow in Rockpark, with a pestilence that had come through the town, destroying all their cash crops. Then a plague swept over the town, inflicting nearly every cobbler with chronic hiccoughs; finally a witch had cursed the townspeople so the only words any could utter were "Hmmm. Precisely." All the businesses, stores, and guilds fled from the town. Lady Greelina saw her father despairing the loss the town was suffering, so she brought her wombat in and told him that her wombat could save the town as it was sacred to Ius and that it could grant a wish. The king thought this was fairly flakey, but he had nothing to lose so he uttered a modest wish to the wombat, "All I want is for one business to come to Rockcreek that will never leave no matter the calamity." The king had always been cruel to the wombat, so the wombat had Ius create an equipment store in front of the palace gate that would never go away. The royal family ended up going mad and eating one another with the wombat being the first to be eaten. This equipment store is still present in Rockpark to this day.[1]