This article is about the faction. For the book, see The Glenmoril Wyrd. 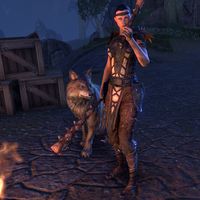 A Viridian Wyress and her Wolf Guardian 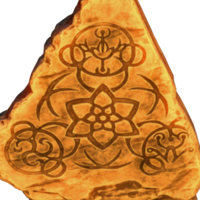 The Glenmoril Wyrd (also known as the Glenmoril Coven and the Glenmoril Witches) is a loose association of female-only Bretonic witch covens who revere nature and the natural world.[1] They enforce laws of nature which only they recognize, mostly in its darker aspects.[2][1] Their origins is rooted in the ancient people that dwelled in High Rock,[3] the Nedes that transitioned into Bretons through intermingling with the Aldmer.[4][5] Membership however also extends to outsiders,[6] even those from other races.[1] Their ranks consist primarily of humans, though some covens include beastfolk such as hagravens[7] and lamias. When present, lamias and hagravens usually take on leadership roles within their respective coven.[1] They have had a presence in High Rock,[8] Solstheim,[9][10] Cyrodiil[11] and Skyrim.[12] Some sects of the Glenmoril Wyrd are notable for possessing secrets for curing lycanthropy and vampirism.[11] Some city-dwelling members of the coven are vampires themselves.[13] This tribe of vampires grew so powerful as to gain the attention of the Cyrodiil Vampyrum Order, who considered them to be "Rivals".[13] Glenmoril Wyresses are known for their ability to transform into creatures such as wolves[14][15] and enormous ravens.[16][17] This beast-form magic is attributed to their knowledge of the mysteries of Hircine's domain.[UOL 1]

The Glenmoril Coven were originally part of the Wyrd, a singular entity that later split into subgroups, such as the Glenmoril and Jephre-worshipping Beldama Wyrd.[18][19][20] The Wyrd stem from the same traditions as the Druids of Galen,[21] but a religious schism brought about the Wyrd's separation.[22] Repulsed by Mer and the civilization-embracing druids they referred to as "barons in ivy robes", these witches retreated into isolation, and sought out the Earthbones in their efforts to prostrate themselves before unmarred nature.[22][3] When the Druid King led his voyage for his people to the Systres, these sisterhoods remained behind on the mainland to safeguard the forests of High Rock,[23] with some of the dozen or so covens even spreading throughout Tamriel.[20] The Wyrd's way is to turn away from civilization altogether, and to live in nature as beasts do[22] The Glenmoril along with the various other Wyrd covens are seen as dangerous and to be placated, with contributing factors such as but not limited to their reclusiveness, moral codes, and lack of men to replenish their ranks.[20][1] Thus, they are known to face persecution.[24][1]

We are a part of the world around us. The animals, the flora, the earth … all these respond to us, and we to them.
When they hurt, we hurt. When we're content, they're content. Everyone's part of the world we share, though not everyone cares.
—Wyress Linnae

The Glenmoril Wyrd are few in numbers, but their several covens are spread all across Tamriel. There are around eight known Glenmoril Wyrd covens. The Greenspring Coven is the easternmost coven, residing in central Skyrim. The westernmost of these covens resides in the Ilessan Hills of High Rock. The Hagfeather Coven resides in western Falkreath, and the Markarth Sisters predictably live in Markarth. The Markarth Sisters are the only urban Glenmoril Wyrd coven, and the only coven that lives even remotely near a city. The Viridian Wyrd live in Bangkorai's Viridian Woods. The Fen Witches of Hjaalmarch make their home in the swamps of western Skyrim. There is also the Rimerock Wyrd,[1] whose location is unspecified, but likely practice near Haafingar, if Rimerock Burrow has anything to do with their namesake.

Each of these covens follow similar principles, but differ somewhat in their religious beliefs. They are inclined towards Daedra-worship, and most of the covens worship Hircine. The Fen Witches are adherents of Molag Bal, the Hagfeather Coven worships Namira and the Markarth Sisters revere Mehrunes Dagon. Relations with the Reachmen also vary from coven to coven. The Hagfeather Coven, the Rimerock Wyrd, and the Markarth Sisters all have cordial relations with their neighbors from the Reach, but the Ilessan and Viridian Wyrd have clashed with the Reachmen for thousands of years. This can be chalked up to a difference in their reverence for Hircine.[1] The Ilessan and Viridian Wyrd venerate the less-feral aspects of Hircine, and even provide cures for lycanthropy.[25] The Reachmen, on the other hand, prefer the vicious side of Hircine's sphere, and celebrate lycanthropy as a blessing rather than a curse.[1] Despite their many similarities, the Reachmen and Wyrd view each other as distinct groups.[26]

Due to their reclusive nature and refusal to accept men within their ranks, rumors have spread about the Glenmoril Wyrd replenishing their ranks by stealing young girls from neighboring farms. This is untrue, except in the case of the Fen Witches of Hjaalmarch, who engage in practices far more objectionable practices than mere child abduction. Most covens gain new members when unwanted young girls are brought to the Wyrd by distressed parents.[1] The Glenmoril Wyrd also bolster their ranks by adopting orphaned girls.[27] The Wyrd also accept women who have been cast out by their families into the fold.[28] The Viridian Wyrd are accompanied by wolf guardians, some of which are their fellow sisters who have taken the shape of the wolf.[14] These powers allow the wyresses to enter the Nature Realm as wolf spirits, allowing them to bypass obstacles in the physical realm.[15]

The Glenmoril Wyrd believe in balance. For each life taken, a new one is given, in one form or another. They take only what they need, they ask before taking it, and they do not waste what they acquire.[29] The Wyrd live simple lives with what the land provides.[28] They do not command the forest, nor does the forest command them.[29] The Glenmoril Wyrd draw upon the power of nature for their magicka.[14]

Religious idols comprised of tree roots shaped by wyrd magic have been unearthed by scholars. They depict female humanoid-animal hybrids, such as a woman with stag horns and cloven feet, a scaled woman, and a six breasted wolf woman. One researcher initially theorized they were representations of Hircine, but later concluded they may represent totemic Divines, like those of the Atmorans.[30]

During the Interregnum, the Glenmoril Wyrd allied with the Kingdom of Evermore to fight against the Dark Witnesses invasion in northern Bangkorai around 2E 282.[31] In the same year their sacred temple, the Fallen Grotto was attacked by the commando of Dark Witnesses led by Brinarch.[25]

Later that year, the Firesong Circle assaulted both the Beldama and Glenmoril Wyrd, seeking the location of the nature spirit Frii. They abducted elders of both covens, needing them to open the way to the spirit. This led them to the Sunken Road in Bangkorai, where Archdruid Michiel of the Firesong located Frii's sapling. The archdruid was slain, and Frii was taken to the island of Galen to be among the Stonelore Circle.[19]

Before the Warp in the West, the witches maintained a hidden coven in the wilderness of the Ilessan Hills in High Rock, as well as many covens in several towns and cities within the Iliac Bay area.[8] An artifact was discovered by a Glenmoril Witch, a revelation brought to her through the stars. In return for kidnapping the witch's great-granddaughter to become the witch's successor, she revealed the clue to a questing member of a knightly order, who retrieved it from the dungeon where it lay. However, there are conflicting accounts on what the artifact actually was, with Auriel's Bow, Auriel's Shield, or the Lord's Mail being three possibilities.[32]

The witches occasionally visited the island of Solstheim, which they did in 3E 427, during the Bloodmoon Prophecy. Ettiene, Fallaise and Isobel, three Breton witches, set up camp in Gloomy Cave, an ice cave on the Isinfier Plains.[9] The witches offered to cure werewolves who came to the Altar of Thrond of their Lycanthropy.[9] This was achieved through a ritual in which the life of an innocent was taken.[9] However, the witches also possessed an enchanted a scroll capable of curing Lycanthropy.[9] This trio of witches took on the form of hagravens by 4E 201, and crossed paths with the Last Dragonborn at the Altar of Thrond.[10]

Although there were once covens located in Cyrodiil, none existed within its borders by 3E 433. A retired Breton member of the coven lived in Drakelowe by the Nibenay Basin at this time. She was persuaded to create a potion to cure Countess Rona Hassildor of Skingrad of vampirism.[33]

Some time before 4E 201, an offshoot of the coven located in Skyrim made a pact with the Companions, an ancient mercenary guild based in Whiterun. It is unknown when exactly this transaction took place, but the Companions have existed for five thousand years, and the beast blood has only been afflicting the companions for a few hundred.[34] The pact made with the witches turned high-ranking members into werewolves, and since that time, partaking in the beast blood became a tradition within the Companions' inner circle.[35] Although many members embraced the affliction, it prevented the Harbingers of the guild from entering Sovngarde after they had died, instead becoming trapped in Hircine's Hunting Grounds.[34]

By 4E 201, this coven, located in western Falkreath Hold, had become the last haven for the Glenmoril Witches in Skyrim.[34] All of the members present in the cave were hagravens.[7] Kodlak Whitemane, the Harbinger of the Companions, wanted to find a cure to his Lycanthropy before he died.[34] He sent a new recruit to wipe out the witches and retrieve their decapitated heads, which is where their magic is contained.[34] Kodlak was killed before he could be cured,[36] but his ghost was freed when the recruit burned one of the witches' heads in a ritual brazier and killed Kodlak's wolf spirit in the Tomb of Ysgramor.[37] Several other Companions followed his lead and cured themselves in the same manner.[38]