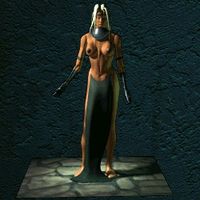 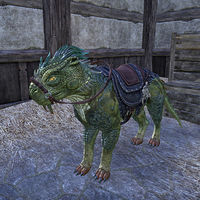 Lurchers are wooden golems of multiple origins.[5] In Valenwood, the Bosmer use the local flora as a base, and other ingredients are added to the mix, such as bug parts to give their lurchers special qualities.[6] The Shimmering Kollopi Tree has seeds can be planted and turn into a vengeful lurchers. In Greenshade, the tribal bosmer see lurchers as gifts from the Wilderking, and "embodiments of the raw energy of the forest".[7] The Bloodthorn Cult performs a perverted ritual using Spriggans as a base, twisting the creatures into lurchers and leaving them a shell of their former selves.[8]

Lurkers are large daedric creatures that come from the murky waters of Apocrypha. They appear as tall, amphibious humanoids with gaping mouths and needle-like teeth described as "towering monstrosities".[9][10] They have what appears to be armor or thick scales lining their lower arms and legs.[9] They serve Hermaeus Mora by guarding forbidden knowledge and are the "Apocrypha Keepers" alongside Seekers.[11][10] As their name may suggest, they lurk beneath the roiling pools of creatia in their master's realm, and may surface if they detect trespassers. Lurkers use their long legs to stamp down on trespassers, and can attack from afar by spewing tentacles from their mouths. Additionally, they can spit acid from their mouths. Their flesh has regenerative properties, allowing them to heal when they are attacked as well as resist poison.[9]