Lurkers are Daedric creatures that come from the murky waters of Hermaeus Mora's realm of Apocrypha. They appear as giant amphibious humanoids, and serve their Prince by guarding forbidden knowledge. Lurkers attack with swipes of their huge hands, and use their long legs for stomping attacks, which have a 100 point stagger effect within 16 feet. They can also attack from afar by spewing tentacles from their mouths. They are very dangerous opponents, and should be fought one at a time. They also have the ability to regenerate health. 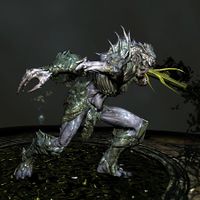