"Only a daedra most foul could have concocted such a malevolent and twisted weapon. But it appears that all who wield it end up with the crazed eyes of those wild men who roam the hills chattering with rabbits." — Admonition Against Ebony 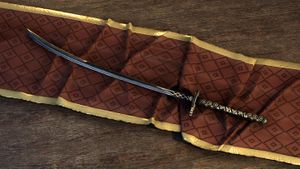 The Blade has corrupted and perverted the desires of great men and women, and is infamous due to the many lives it has taken at the hands of its dark owners. It is known to drive all who wield it insane. Wielders of the blade consign their everlasting soul to Oblivion.[1] In 2E 582, a charm was cast on it by a mage so it would not remain with any one individual for long, in an attempt to save the souls of any too infatuated by the Blade.[2][3]

According to Khajiiti beliefs, the thief god Rajhin's apotheosis began when he stole the Ebony Blade and the Ring of Khajiit from Mafala while the Prince was sleeping, though both artifacts would be returned eventually.[4]

Some time in the early Second Era, an Altmer named Nerien'eth uncovered the Ebony Blade while scouring Tamriel for artifacts to study. He brought it to the Agea Relle for study, believing it to be an ancient Akaviri blade.[5] Mephala's whisperings through the blade slowly began to corrupt Nerien'eth's mind, until eventually he snapped and ensnared the souls of his students and fellow researchers. He summoned Daedra to torture their souls for eternity, and shattered the soul of his wife Alanwe so that she would suffer the most. The Agea Relle became known as the Crypt of Hearts, and was avoided by the people of Rivenspire for many years. In 2E 582, a group of Undaunted entered the Crypt and cleared it of undead and Daedra, freeing the captured souls and restoring Alanwe's spirit.[3]

Instead of departing for the afterlife, Alanwe stayed behind to protect the vault from Nerien'eth, who returned in force later that year. Using the Ebony Blade, Nerien'eth summoned minions of Mephala, powerful Daedra who aided him in recapturing the lost souls. The group of Undaunted returned, and once again aided Alanwe by investigating Nerien'eth's return. The group managed to locate the Ebony Blade, and were forced to slay Nerien'eth when he wielded it in battle. Alanwe's spirit then took the blade and communed with Mephala, the unknown whisperer. Mephala attempted to corrupt her by promising to help destroy the weapon, but Alanwe refused to listen to the Prince. Instead, she used her own soul to place a charm on it so that it would never remain with an individual for long. She then sent it far away, although the blade was fully empowered at the time and fought against her will, yearning to eventually return home. However, Alanwe's sacrifice did deny Mephala the blade's use during a great war between the forces of Oblivion.[3]

The Ebony Blade was later uncovered during the Imperial Simulacrum by the Eternal Champion, in the province of Valenwood.[1] In the events leading up to the Warp in the West, an agent of the Blades summoned Mephala and was tasked with assassinating a noble in the Iliac Bay area. In return, a worshipper of Mephala rewarded the agent with the Blade.[6] In 3E 433, the Champion of Cyrodiil summoned Mephala and was tasked with starting a feud between two prominent families, the Nordic Ulfgar and Dunmeri Dalvilu, in the settlement of Bleaker's Way. The Champion murdered the leaders of the two families and planted evidence which implicated the other. The settlement descended into chaos, and the two families fought until only one remained. Mephala then rewarded the Champion with the Blade.[7]

Sometime after the end of the Great War, circa 4E 180, the Warrior came across the Ebony Blade in their journey. The method of its acquisition is conflicted, however; some claim that it was obtained from the plane of Oblivion known as the Abyss, while others believe it was looted from a chest.[8]

Some time in the Fourth Era, the Ebony Blade came into the possession of the jarl of Whiterun, who attempted to destroy it by placing it within the Skyforge. Not even the hottest fires could melt it, and in fact the sword seemed to cool the coals when it was placed within. As a last resort, the Blade was hidden away deep within Dragonsreach, with access granted only to the Jarl of Whiterun and his trusted court wizard.[9] In 4E 201, Nelkir, the young son of Jarl Balgruuf the Greater, stumbled upon the locked door to the chamber where the Blade was kept. Mephala spoke to the child through her artifact, whispering secrets through the door. Word spread through the city of the jarl's "dark child", and the Last Dragonborn was tasked with helping the child. When questioned, Nelkir spoke of the "Whispering Lady". The Dragonborn investigated the "Whispering Door", and was contacted by Mephala. Under the guidance of Nelkir, the Dragonborn obtained a key to the door, and retrieved the Ebony Blade. However, having been locked away for so long, the weapon had lost much of its power. Mephala instructed the Dragonborn to nourish the Blade with the "blood of deceit" by murdering trusting friends.[10]