The first time you go to sleep after escaping the Imperial Prison, you will be contacted in your dreams again by Ria Silmane. She will say:

"I see you have strengthened your arm, and your mind. It is time we began this journey. This is the Staff of Chaos, the one item that can open the door between this world, and the dimension to which the Emperor has been banished. Tharn used this item to destroy my corporeal form when I tried to warn the Council. He knew that the Staff of Chaos was nigh indestructable [sic], having been made from the essence of the Land itself. But in that he found the key. As the land is split, so did he shatter the Staff into eight perfectly formed pieces. These he scattered across the realm. I have been able to divine the location of the first piece, a place called Fang Lair."

"It is said that Fang Lair was originally built by the Dwarves of Kragen. Legend has it that a Great Wyrm drove the Dwarves from their home in the Dragon's Teeth, and took the Lair for itself. I only wish I knew the exact location. Perhaps there are sages, or scholars who would know of this place. Somewhere in its dank depths lies the first piece of the Staff of Chaos. I wish you well. I do not think Tharn knows of your escape, but I can do little else in this form. I have tried to obscure your identity with a spell, but I do not know how well it will hide you. Take care for Tharn may be searching. Go forth with the blessings of the true Emperor, and myself..."

Ria Silmane told you to find Fang Lair. But as she does not know where it is, it's up to you to find it. You do this by asking passers-by where it is. Some will tell you they've never heard of it; others will say they thought it was just a story. But eventually you will hear that maybe you should check out Hammerfell province. Go there; it's in the west of Tamriel.

Once you get to Hammerfell province, continue asking around about Fang Lair. Eventually, someone will tell you to check out Rihad, a city-state in the southern part of the province.

Once you get to Rihad, resume questioning the locals about Fang Lair. After a while, someone will tell you to go to the palace. Every palace is found on the city wall; if you have trouble finding it, ask someone for directions and they'll either give you a compass direction or, if you're near enough to it, they'll actually write "PALACE" on your map in the appropriate location.

Talk to the ruler of Rihad, Queen Blubamka. She'll say that she'd love to tell you all about Fang Lair, but first there's the matter of this parchment stolen from her by Golthog the Dark, a goblin chieftain. She can't tell you about Fang Lair unless you take the trouble to bring back this parchment, because, as she claims, the parchment is necessary to help decipher the location of Fang Lair. She is nice enough to mark the location of Golthog's lair on your map: a ruined stronghold called Stonekeep. The stronghold is fairly close to Rihad, and looks like a rock-like cave entrance sticking out of the ground on your world map (right click on the picture of the map to bring up the world map). Before you go, though, you may want to purchase a Potion of Cure Disease.

Stonekeep is a sprawling, single-level dungeon, and like all Arena dungeons is filled with all manner of monsters and plenty of treasure. It features plenty of water to swim in, and in fact you will get wet unless you can levitate.

There is an iron key on an island just a bit due south of the entrance (40,30). This key is not essential to getting the parchment. It can, however, open one of several locked doors in the residential area of Stonekeep. 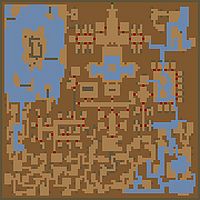 Map of Stonekeep. The parchment is located on the island to the left

The parchment is located on a ghoul island hideout southwest of the entrance. The best way to get to it is to walk straight ahead from the entrance and go into the second room on the right, it is to the right of the statue in the middle of the room. (Watch out for rats and wolves at this point). The third bedroom on the right has a hole in the wall which you must jump through using shift + j. After this, turn right and you will face half a dozen skeletons. They are worth decent experience points at this point if you can kill them. You can also lure them back to the hole in the wall and fight them one at a time but keep in mind that they are resistant to edged weapons such as swords.

In this room you will notice a large island in the center which is guarded by several ghouls. Then it's a short swim or flight to the ghoul island. The parchment itself is a curly brown piece of paper resting on the ground inside the ghoul hideout (72,23). Be very careful when dealing with the various ghouls on the island; they can be particularly hard to kill for lower level players and carry diseases. You may be better off simply grabbing the parchment and running. Also keep an eye out for the piles of treasure on the island.

Return to Rihad palace with the parchment in your inventory and speak to Queen Blubamka. She will then mark the location of Fang Lair on your map as promised. The lair is the northeast corner of Hammerfell.

Before you go to Fang Lair, it is advisable to get a few Potions of Resist Fire, as the dungeon contains both lava and fire-breathing monsters. Also, you might want some Potions of Free Action, as there are creatures there that can paralyze you.

"You stand before the dragon gate of Fang Lair, humbled before its majesty. The Dwarven Hold seems abandoned long ago, its stone walls cracking with age and neglect. Somewhere within its dank depths lies the first piece of the Staff of Chaos..."

Fang Lair is an abandoned Dwarven mine. You will see tram tracks, trams, enormous holes, trenches and tunnels, and ladders. The trams and tracks are just dungeon dressing, but everything else has to be dealt with, particularly the tunnels. The top level of Fang Lair is quite large, and can be a challenge to explore given all the tunnels. You will have to traverse the tunnels to reach the ladder down to the second level of Fang Lair (unless you have the Passwall spell at your disposal). You can find this ladder in the extreme southwest part of the level.

To reach the ladder, however, you have to pass a magically locked door, and to get the key to the door, you will need to correctly answer the first of many puzzles and riddles you will encounter. This one is intended to be a logic puzzle:

You are only given three options, so if you get it wrong, you can try again and you will eventually get it. Note, however, that if you get it wrong, the spiders in the cages you just passed will find themselves free to open their doors and come after you. The correct answer is "2".

Your answer will unlock one of three different cage doors just to the west of you, and in fact will open the cage corresponding to the number you guess (walk in front of the cages and a note will pop up telling you which is which). In each cage is a key you can use to open either the magically locked door in front of you or one of the magically locked doors just north of the spider cages. Those doors lead to cages that hold piles of treasure (95,78; 91,78). The idea is to unlock the cage containing the gold key. One strategy is to give the two wrong answers before giving the correct answer to ensure easy access to the treasure keys; note that of course by doing so you will have to deal with the spiders. If you have Passwall, you can have your cake and eat it, too: just open the correct cage first, then use Passwall to destroy the walls leading to the other keys.

The first staff piece is behind a locked door

A piece of the Staff of Chaos

In the center of this level is a room with a door locked by a riddle:

A simple question for thee,
-
What is neither fish nor flesh,
feathers nor bone,
But still has fingers,
and thumbs of its own?
-
What is thy answer, mortal?

The riddle has two possible correct answers: "gauntlet" or "glove". The room is almost impossible to miss, as this level is not large in area and there isn't a lot to look at. Answer the riddle to unlock the door to get to a couple of fire-breathing hell hounds and the first Staff Piece (64,75). The hell hounds can cause a lot of damage, especially if you are a low level. To avoid their attack, you can open the door and immediately take cover behind the wall. After a few seconds they will vanish. Sometimes they won't vanish, a good strategy is to use an invisibility spell to get close to them so they don't use their long range attack (which is their most powerful attack).

After resting or arriving back in town you will be greeted by a vision from Jagar Tharn, who is using the same power Ria is to talk to you (though you don't need to be sleeping to receive a vision from Tharn).

"I do not know who you are, but you have made a fatal mistake. Ria Silmane and her feeble powers are no protection for you. I should have discorporated her when I had the chance. I will not make the same mistake again. I will use the same dream bridge that she uses, sending my minions across time and space. Already they arrive, ones worthy of the attention you deserve. They will relieve you of the burden of the Staff piece you now hold. Give it to them and I will order your death painless and quick. Resist and I shall see you in such suffering that you will grovel for the sweet release of death..."

After the vision has ended you will be attacked by one of his minions.