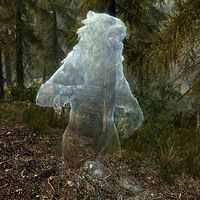 The Ursine Guardian is a spectral bear located in the woods near Twilight Sepulcher.

To reach the plateau that the bear is found on, follow the gully to the north and when you reach the cliff wall turn south. The guardian will appear in the center of a fairy circle comprising eight white cap mushrooms. Details can be found here, under smaller places of interest.