High Hrothgar is a small settlement roughly halfway up the Throat of the World, and east of Whiterun. It is a major landmark and home to the reclusive Greybeards who are masters of The Voice.

On the way up to High Hrothgar there will be at least one frost troll on the path regardless of your level (though you can avoid fighting it), and you will potentially encounter several more cold-themed enemies like snow bears and ice wraiths. As well as enemy encounters, a few travelers will be seen on the way to the top - pilgrims that are exploring and reading the ancient tablets, which contain wise sayings. Reading all of the tablets grants the Voice of the Sky effect for 24 hours, which prevents animals from either attacking or fleeing from you, and they do not have to be read in numerical order.

Once you have completed The Horn of Jurgen Windcaller you can safely take any items from within High Hrothgar. If you later on kill Paarthurnax during the quest Paarthurnax, then taking items here will be counted as stealing. 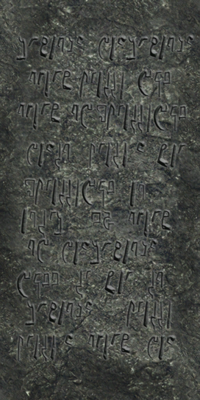 The etchings on each tablet