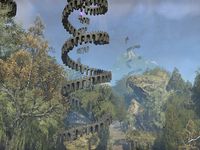 The Fields of Regret are a realm of Oblivion, created and ruled over by Clavicus Vile, the Daedric Prince of Wishes.[1] The realm appears as a tranquil countryside,[UOL 1] dotted with majestic cities of glass and ornate buildings and populated by Skaafin. It contains dense forests, lakes, and mountains, with floating golden metals and stone spirals filling the landscape.[2] The city of Umbriel was once a part of the realm, but was eventually severed and came to rest in the Realm of the Hist.[3]

During the climax of the Daedric War in 2E 582, an alliance between the Psijic Order and the princes Clavicus Vile and Mephala was made to stop Nocturnal from ending reality, as she betrayed the Triad and obtained the Heart of Transparent Law. She now gained control over the Crystal Tower and attempted to encompass all of reality in darkness, prompting Barbas to accompany the Vestige, Earl Leythen, and Golden Knight Darien Gautier into the Fields of Regret so they could reach the realm's version of the Crystal Tower. Upon arriving, Nocturnal had sent her forces to the Fields of Regret, and Barbas stayed behind to lead the defense of the realm as the other heroes ventured into the tower with the Resolute Anchor.[4]

Cyrus the Redguard once visited the realm in 2E 864 to bargain with Vile, who had been given the soul of his sister, Iszara, by the Sload necromancer N'Gasta. Cyrus was made to choose between two doors, one guarded by a Daedra that always lies, and the other guarded by a Daedra that always tells the truth. Cyrus won the Prince's game and rescued his sister's soul.[5]

In 3E 433, one of Vile's artifacts, the Umbra Sword, was returned to the realm by the Champion of Cyrodiil at the Prince's request. However, Barbas, the Hound of Vile, knew it was a poor decision and attempted to stop its return,[6] as the sword contained a piece of the Prince's power which had gained sentience. The being, who called himself Umbra, escaped the sword once it was brought to the realm, and stole a significant amount of the Prince's power before fleeing to the edge of the realm. To prevent Umbra leaving with his power, Vile sealed the borders of the realm, essentially sealing them all within.[7]

In the early years of the Fourth Era, a hole was opened into the realm by the first ingenium, a device created by two Dunmer named Sul and Vuhon. The hole leached power from the realm, which was used to prevent Baar Dau crashing into Vivec City after the disappearance of Vivec. In return, the mortals provided a steady stream of souls, so Vile permitted the hole to remain. Umbra was drawn to it, and, when the ingenium was destroyed by Sul, briefly breaking Vile's barrier, he threw the Umbra Sword to Tamriel to prevent the Prince trapping him within. Sul and Vuhon were also pulled into Vile's realm, where they were beset by Umbra. Vuhon struck a deal with him, and the two fused to become a being called Umbriel. A second ingenium was constructed, and Umbriel used it to rip a piece of Vile's realm away, which was set loose in the Void. This detached bubble of Vile's realm contained an inverted pyramid of rock, similar in appearance to a floating mountain, topped with a beautiful city and containing vast labyrinths of passages below. It also came to be called Umbriel. The pocket realm had its own population of Hist, sentient trees related to those in Tamriel, and the ingenium transformed worm-like larvae into strange humanoids of many kinds, known as Umbriellians.[7] It was drawn into an unnamed realm of Oblivion by the Hist on the island in 4E 48, after Umbra was drawn back into the sword.[3]

While Umbriel invaded Tamriel, Vile's realm was left in ruin. Without access to his power, Vile's realm shrank, dissolving at the edges until it was only a few miles in radius. The Prince summoned Sul and Prince Attrebus Mede to his realm when they made contact with the unstable Umbra Sword on Solstheim, where he aided them in attempting to take down Umbra.[3] It is unknown if his realm recovered after his stolen power was returned.