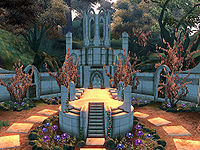 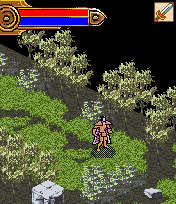 Gaiar Alata, also known as Paradise, was a plane of Oblivion created by Mankar Camoran. It was designed by Camoran to be a side dimension for the Deadlands. Despite its name, the plane was a Paradise only for Camoran and his children; for his followers, it was a prison and torture chamber. Gaiar Alata was destroyed during the Oblivion Crisis.[1]

During the Oblivion Crisis, Camoran stole the Amulet of Kings[2] and fled with it to his Paradise.[3] His hope was to prevent pursuit or, failing that, to trap anyone who managed to enter the realm.[citation needed] Nevertheless, Martin Septim discovered how to reach it[1] and opened a portal for his Champion, who entered Paradise, found and slew Camoran, and retrieved the Amulet of Kings. With its creator's death, Gaiar Alata ceased to be.[4]