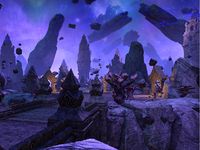 A Khajiiti Monastery within the Dark Behind the World

The Scuttling Void is a realm of Oblivion ruled over by the Daedric Prince Namira. It is also called the Dark Behind the World (which is sometimes shortened to the Dark)[1] by the Khajiit. When a particularly large rift opens between the Dark Behind the World and Nirni, the breach is referred to as the Maw of Lorkhaj.[2][3] Very little is known of the realm of this shadowy Daedra.[UOL 1]

Namiira serves as the antithesis to Khenarthi's role for Khajiiti spirits, instead corrupting them via the Bent Dance so that they may be dragged down into the Dark Behind the World. These corrupted spirits, known as the dro-m'Athra, occasionally slip through the cracks in Nirni, and tempt Khajiit so their souls can be sent to the Dark to serve Namiira.[4] Somewhere deep within the realm, there are grim forges and bent benches where these Lost Cats dance and arm themselves.[5]

The Dark Behind the World has a history with the Temple of Seven Riddles in Reaper's March. The temple was purportedly built too tall—as the Clan Mothers say, "Khajiit aren't meant to stand so close to the Ja-Kha'jay before the dead-climb".[6] The dro-m'Athra have emerged at the Temple of Seven Riddles in part because of this factor.[6] but there is also a story told among the Doubting Monks who reside within the Temple.

Long ago, a Moon-Bishop referred to as the Stone-Tapper resided within the Temple of Seven Riddles. He carried a magic stick that told him secrets when he tapped it on the floor.[2] Day and night, the Bishop tapped the floor, learning all of Nirni's secrets. Eventually, the magic stick ran out of Nirni secrets, so it started telling him darker secrets: Namiira's secrets. The Tapper listened, growing old and crazy. The temple's monks went mad as well because the tapping never stopped. It was a loud and steady sound, like a heartbeat. Eventually, the monks plotted to kill the Stone-Tapper. They lured him to the High Lunarium and stabbed him. All the blood and secrets drained out of the Tapper's body and broken the Temple asunder, revealing a Maw of Lorkhaj.[2]

When the seals in the Temple of Seven Riddles were desecrated by an abbot named Kulan-dro in 2E 582, the boundary between Mundus was torn and the dro-m'Athra invaded the temple,[1] before being banished once again by Chief-Crier Adara'hai of the Twilight Cantors and a group of adventurers.[7]

This Lore-related article is a stub. You can help by expanding it.
Retrieved from "https://en.uesp.net/w/index.php?title=Lore:Scuttling_Void&oldid=2656601"