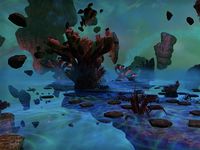 The Colored Rooms are a many-faceted realm of Oblivion, created and ruled over by Meridia, known as the Daedric Prince of Infinite Energies.[1] From what little has been seen of the Colored Rooms, they seem to resemble a cross between a coral reef and a vast field of floating stones, strewn with colorful trails of dust or cloud. The "ground" between the stones looks like luminescent water, but is solid enough to walk on. The skies are described as floating effluvium oceans of crimson.[2][UOL 1]

Aurorans and their warhorses are the spawn of Meridia that reside in the Colored Rooms, being made from pure light and have skin tones of virtually any hue.[3][4] Golden Saints are also purported to reside in the realm. The Colored Rooms have been described by those souls who have been there as "pretty boring" aside from Meridia's lectures (which are described as "pretty boring" as well).[5]

The Colored Rooms were formed when Meridia fled Mundus with her fellow Star-Orphans. However, instead of fleeing to Aetherius, Meridia went into the Void, where she was chided by the Daedric Princes for her trespass. Bending the light of Magnus, Meridia then carved her own sphere from the chaos of the Void by an act of "sheer divine will", creating a new plane of Oblivion.[1][6]

The half-Ayleid king Umaril the Unfeathered was defeated by Pelinal Whitestrake in the First Era and was cast adrift in the "waters of Oblivion", having made an alliance with Meridia granting him immortality. He spent many thousands of years reforming in the Colored Rooms before he could return to Mundus.[7]

During an earlier confrontation with Molag Bal in the Planar Vortex, Darien Gautier was caught up in the magical spell of a Light of Meridia and was transported to the Colored Rooms.[5] When the Vestige defeated Molag Bal in Coldharbour circa 2E 582, Meridia briefly brought them to the Colored Rooms to reclaim their soul, where Molag Bal addressed them and stated the Planemeld was over.[2] Darien later returned to Tamriel as Meridia's "Golden Knight", a vessel of her power,[5] and after he was abducted by Mephala, The Triad invaded the Colored Rooms.[8] When the invasion was over, enemy combatants were rounded up and purified, with some being banished to Nirn.[9] King Narilmor, reincarnated as the Symphony of Blades, fought off a group of Undaunted in the realm but was defeated, resulting in the retrieval the right half of the Wrathstone.[10]