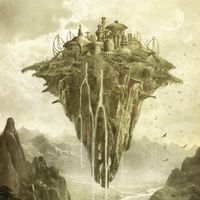 When Umbriel, a floating city, first appears in Tamriel, it is witnessed by three sailors, Iffech, Keem, and Grayne. This is also shown to Sul by Azura in a dream. Another sailor, Ixtah-Nasha, relays stories of the floating city to his cousin, Mere-Glim, who in turn relates them to Annaïg Hoïnart.

Glim "rescues" Annaïg from her father Taig's attempt to forcibly send her to Leyawiin away from Umbriel, only to himself be inexplicably drawn to Umbriel. To avoid being drawn with him to the land under Umbriel, where she sees the city forces killing Lilmoth's residents, she uses a flying potion on them both and, unable to pull Glim away from the floating island, guides them onto Umbriel itself.

Umbriel is powered by a new version of the Ingenium. Vuhon, the creator of the ingenium, reveals that he used the device to twist a piece of Oblivion from Clavicus Vile's realm, setting it into flight and rendering moot the barrier erected to prevent his and Umbra's escape. The people killed below Umbriel are used to power the ingenium, to sustain the floating city and thereby satisfy a pact made with Umbra.

The city is in a general cone shape, with the narrow end at the bottom. The "sump" is on the bottom in the inside, the outer edges are known as the "Fringe Gyre", and the palaces of the higher lords are found around the top.

Umbrielans - many of whom are similar in appearance to the races of Tamriel - are born into fully-formed adult bodies and live short lives; a ten-to-fifteen-year-old Umbrielian is considered old. When Umbrielans die, their soul is recycled and reborn into a new body, though they do not retain the memories of their previous life. The language spoken on Umbriel is very similar to Ehlnofex, and, unsurprisingly, is named Umbrielic.

Bolster Midden
The Bolster Midden is the midden with the "richest scent" of the four Lower Middens; one of the places where the refuse of Umbriel is sent. It is the first named location Annaïg and Glim find.

Fringe Gyre
A region on a cliff on the outside edge of Umbriel, wrapping around it. It is filled with trees that seem to be related to The Hist, including one especially tall one. The trees produce what Umbriel needs, such as different types of fruit and even things like iron. Tree-tenders take care of the trees and harvest these plants. Mere-Glim discovers the Fringe Gyre through a tunnel from the Sump and meets Fhena there, and it is one of his favorite places on Umbriel.
Ghol Manor
Ghol Manor is one of the regions of Umbriel, served by Qijne's kitchen. Lord Ghol dislikes boring food.
Glass Forest
The "glass forest" is the name that Sul and Attrebus gave to a webbing of a glasslike material found at the top of the city. Vuhon is able to control the glass tubules to his desire, making them move him or immobilize an enemy.
Kitchens
The Kitchens (called "vehrumasas" in Umbrielic) are where food is made for the lords and ladies of Umbriel. The lower kitchens make food for the minor lords, who have more earthly palates, while the upper kitchens work for higher lords, who require food made of spiritual essences. Qijne's kitchen, which is one of the lower part, mainly has walls lined with ovens, with the center of the room containing pits of hot stone, counters and cabinets, and cages and baskets hanging from chains from the ceiling. One end has tables for more delicate work. Toel's kitchen, by contrast, only has one pit and oven, but plenty of red granite countertops with alchemy apparatuses, and is mostly dedicated to preparing soul essences - both for the lords of Umbriel and for the trees of the Fringe Gyre.
Lower Middens
The Lower Middens are essentially a gigantic trash room, where the refuse from the kitchens that doesn't wind up in the sump goes and is eaten and digested by worms, likely before being used for some other function.
Marrow Sump
The Sump is where life on Umbriel starts and ends: souls are processed; people are born; dead bodies are sent here; plants grow and are harvested. It is also where Mere-Glim was sent to work because of his ability to breathe underwater. The workers of the Sump, who help new people be born and who collect food for the kitchens, are known as skraws. Skraws breathe a gas known as "the vapors" to be able to breathe in the water, which is poisonous to them: it causes jaundice over time, and eventually kills them.
The watery sump is home to various creatures who are hostile to newcomers of the Sump, but they grow used to them. The sump is a cone-shaped lake beneath the city, and it is entered from watery tunnels in caves. The deepest part is known as the Drop; proforms (growing unborn Umbrielians) are attached to the walls about two-thirds down, and the conduit of the Ingenium resides at the bottom.
Oroy Mansion
Oroy Mansion is one of the regions of Umbriel, served by Qijne's kitchen. In contrast to Prixon Palace, the residents like burnt food.
Prixon Palace
Prixon Palace is one of the regions of Umbriel, served by Qijne's kitchen. Slyr tells Annaïg that they don't like their food burnt.
Rhel Palace
Rhel Palace is the home of Lord Rhel, and he believes it to be the greatest of the eight palaces. He says that he built it himself, although artists of Umbriel help design the rooms and they change quickly, as Rhel quickly grows bored of the decorations. One room that Annaïg visits has a floor of wavy rose-colored crystal, and according to Rhel, ten days prior it was a jungle styled after the wilds of Black Marsh.
Toel's Private Quarters
Toel's quarters are richly furnished and the walls are draped in fabric. There is a balcony where he entertains company, which has an excellent view of Umbriel: it overlooks a basin with a lake, and much of the city itself: buildings jutting from the rock and castles hanging from cables, and towers on the rim of the island that appear to be made of spun glass.