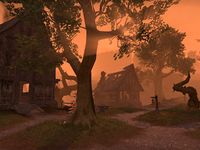 Lord Velian's Plane was a small pocket realm of Oblivion, created in 2E 582 by a member of the Bloodthorn Cult called Lord Velian.

It was created through necromantic ritual after the villagers of Eagle's Brook, in the Cambray Hills region of High Rock, were turned into zombies. The realm was a copy of the village, filled with ruined houses and writhing vines. The sky was orange, and the only inhabitants were banekin and Velian's shade.

The local mage, Merien Sellan, learned of Velian's ritual and entered the pocket realm to stop him. He allowed himself to be willingly captured in order to collapse the plane, killing himself in the process. His son Tamien asked the Vestige to enter the realm and kill Velian, allowing Merien to escape before the collapse but also allowing the cultists to leave with the zombie army by ship. It is unknown if Merien was rescued, although the realm was collapsed regardless.[1]