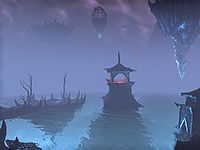 The Village of the Lost

The Village of the Lost is a border realm of Coldharbour, created by the Daedric Prince Molag Bal and ruled by Overseer Grexev. It formed during the Planemeld when Molag Bal attempted to fuse Coldharbour and Mundus. Although not part of Coldharbour proper, three villages were pulled from Tamriel and landed in the realm after being fooled by deals with the Dremora Grexev. These included a small township in Vvardenfell named Silver Run, along with the Khajiiti village of Khaj'yahai and the Orc stronghold of Dushnikh's Shadow.[1] These villages were then scattered among islands of floating rock, and the villagers' souls were stolen. As it materialized, the realm was entirely covered in Azure Plasm, unformed chaotic creatia common in Coldharbour, from which all Oblivion matter is formed.[2]

The leaders of the three villages— Suronii, Zirani and Ugorz— had survived the initial merging and remained as Soul Shriven. Daedra and undead also flocked to the realm in great number to protect it. In 2E 582, a Tamrielic invasion force entered Coldharbour in an attempt to halt the Planemeld. A servant of Meridia named Mezha-dro came to the realm to seal tears in Oblivion and prevent any more parts of Tamriel from slipping into the realm.[1]

The land that was torn from Tamriel during the Planemeld was restored after the defeat of Molag Bal at the hands of the Vestige.[3]