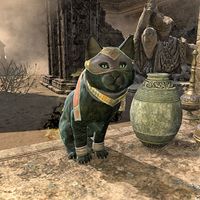 Path of the Hidden MoonEdit

While searching the temple summit for answers, read The Tale of Three Moons and the spirit will make herself known:

Vastarie : "Hmm. Some kind of Khajiiti children's tale?"
<Mazza-Mirri appears where the book once was>
Mazza-Mirri : "You know better than that, witch of Azurah."
Vastarie : "Greetings, spirit. We've come in good faith."
Mazza-Mirri : "Very well. Who is this youth who travels with you, I wonder? Come, child. Let old Mazza-Mirri have a look at you."

You can then introduce yourself to her:

"Trespasser or pilgrim? Hmph. Both, I think. But you walk this path aimlessly, child.
I am Mazza-Mirri, Clan Mother of the Hidden Moon. Why are you here, I wonder?"
Vastarie and I are trying to stop Arum-Khal. We need information.
"Hmph. Too late for that. Our wards flicker and fade. My children all lie dead. No one and nothing remains to stop Arum-Khal. We failed. I failed.
Even if a champion emerged to wield the Moonlight Blade, the hour is too late."
The Moonlight Blade?
"Azurah's sword of the faithful. Ugh. You know nothing of our ways, child.
Even so, I see strength in you and great deeds in your wake. Hmph. Read the stones that still stand here. We will see if your mind and spirit are as keen as your blades."
May I ask you some questions?
"How would you know what to ask? You know nothing! Just read the stones, child. The only people more impatient than the very young are the very old, and Mazza-Mirri is very old indeed.
Deeds now. Questions later."

Once you have read the stones, she will call you over:

Mazza-Mirri : "Come now, wanderer. If you are not afraid. I have more to show you."

She will sum up what the stones showed:

"Do you see now, child? We servants of the Hidden Moon protected and guided the people's souls—both true souls and bent. Guardians and redeemers.
Now, all that remains of our order are old stones and old spirits. Spirits like me."
What went wrong?
"Azurah's twilight path—the path to love and redemption—is fraught with perils and temptations. I thought I prepared our adepts to face the darkness without falling to it. I failed. Arum-Khal is the result."
If you know this much about Arum-Khal, you can help me stop him.
"How easy you make it sound. You may know that a dust storm will tear down your house, but knowledge alone will not beat back the wind. A wise corpse is no less dead.
Come. Mazza-Mirri will teach you one last lesson."

She will then created a portal to the inside of the temple, if you speak to her before entering, she'll chide you:

"You mean to face a dark lich, but shrink at the sight of my cozy portal? Ha!
We cannot enter the temple through normal means, child. Not yet. Trust old Mazza-Mirri and step into the light."

Once inside the temple, Mazza will tell you the story of Arum-Khal:

Mazza-Mirri : "Now for the story no teaching stone can tell."
Mazza-Mirri : "Arum-Khal served our order for many years as our greatest champion. But as his power grew, so did his pride. In time, he renounced his faith in Azurah and turned to the dark path. The way of the dro-m'Athra."
Mazza-Mirri : "Many adepts fell under his sway, and the order collapsed into civil war. The battles sundered the temple and blighted the canyon below. We triumphed in the end, but Arum-Khal would not die. He fled—seeking refuge in one of his orbs."
Mazza-Mirri : "We locked the orbs away, but now our wards grow brittle, and Arum-Khal prepares to emerge once again. Only a warrior of the Hidden Moon can end this—and only with the powers of the Moonlight Blade."

After seeing the story, you can ask her about her plan for dealing with Arum-Khal:

"Make no mistake, child, Arum-Khal's power and hatred have only grown since we first locked him away.
The remnants of our order spent their waning years looking for a way to destroy him permanently. We found one. But it carries great risk."
This Moonlight Blade, right? What is it?
"It is more than a blade. It is a gateway. A path. A key. A sacred tool of our order, given to us by Azurah herself!
Perhaps you can bear this weapon's weight. Perhaps not. This calls for another test, I think."
What test?
"Only a handful of adepts have ever held the Moonlight Blade, and each of them possessed a will of iron. I need to know your quality.
I will conjure dark spirits in the next chamber. Banish them without falling yourself, and the blade is yours."
I still have questions, Mazza-Mirri.
"I would worry if you didn't.
Well, go on. Ask your questions, child."

So, the Hidden Moon adepts practiced necromancy?
"Hmph. Only the very crude would call it necromancy.
Yes, we reanimated the skeletons of fallen Khajiit, but always as a path to redemption. The dro-m'Athra who possessed those bones did so to earn their way back to paradise."

Earn their way how?
"By fighting for their true-spirited kin.
Victory illuminated the soul and loosened Namiira's hold on them. When the noise of the Dark faded, even for an instant, they would remember who they were. Then we sent them home. To the Crossing."

To the Crossing? What is that?
"On the edge of eternity Azurah watches over the Gates of the Crossing behind the Lunar Lattice. It is a twilight realm where death's tide reaches the afterlife's shore. Khajiit must pass through it before they reach what waits beyond."

Tell me more about the Moonlight Blade.
"As I said before, it is a gift from our mother, Azurah, and the greatest treasure of our order.
Those who learn the Moonlight Blade's discipline can cut through the boundaries between worlds, and usher souls from one realm to another."

Why didn't you use it against Arum-Khal the first time?
"We did. But despite the sword's power, Arum-Khal escaped to a place where we could not follow.
The adepts who survived our war with the lich made great sacrifices to further empower the blade. But by the time we were done, none remained to wield it."

Is his escape related to those orbs? The phylacteries?
"Yes, it is.
He twisted our powers to create something profane. We must use our powers to destroy it."

You said you knew Arum-Khal. What happened to him? How was he corrupted?
"Arum-Khal was one of my greatest pupils. Strong … very strong. And sharp as Boethra's tongue. Like you, he asked endless questions. Why, Mazza-Mirri? Why? Why? Why? Why?"

Why what?
"Why do we not aid more dro-m'Athra? Why fear Namiira if we bear Azurah's blade? Why do we fear at all?
My answers never satisfied him. He was fiercely loyal to Azurah, but resentful, too. Impatient. And powerful enough to doubt our warnings."

What pushed him over the edge?
"When the time came to select a new steward of the Moonlight Blade, Azurah chose another to wield it. Shando-ri, his friend and rival.
Arum-Khal grew furious. He cursed Azurah, and swore revenge on the mother who spurned him."

That's when he became a lich?
"Soon after, yes. He whispered lies to his fellow adepts. Convinced them that Azurah treated us as slaves and worse. Then came the battle.
We did not realize what Arum-Khal had become when the fighting started. Now we know."

Once you enter the Chamber of Atonement, the test will begin:

Mazza-Mirri : "The dro-m'Athra approach, child. Will you dance to the song of the Dark? Or will you close your ears and fight?"

When you defeat them, she will congratuate you and lead you to the Moon Guardian's Tomb:

Inside the tomb she will be standing the foot of some stairs leading to a mummified Khajiit sitting on a throne:

Mazza-Mirri : "Behold, child. Shando-ri. Guardian of the Moonlight Blade."
Mazza-Mirri : "Know that if you take the sword, you take an oath to destroy Arum-Khal, as well."

If you speak with her she will urge you to take the blade:

"You asked for a means to destroy Arum-Khal. It rests in the arms of Shando-ri. Take it, child."

Once you have the Moonlight Blade in your hands, Shando's spirit awakens:

She will be happy to see him:

"It is good to see Shando again. Speak with him, child. I am certain he has things to tell you."

After speaking to Shando-ri, you can speak to her again:

"You have the means to destroy Arum-Khal now. Azurah watch over you.
Take care of Shando, child. Each of you will need the other before the end."

She will then disappear in a flash of golden light:

Mazza-Mirri : "Brave Shando-ri will guide you now, child. But do not fear! Old Mazza-Mirri will be watching."

Defeat the Dark Spirit of Arum-Khal and try to flee with Shando-ri. You will then hear familiar voices:

Enter the portal and on the other side, Vastarie and Mazza-Mirri will be there:

Mazza-Mirri : "There! They emerge!"
Vastarie : "No. I lost Shando-ri. I am sorry."
Mazza-Mirri : "You have nothing to apologize for. I trained Shando to face the Dark. He will find his way. I am certain of it."

"The sword-wielder returns. Azurah be praised.
In my younger years, we would honor your victory with song and garlands of sugarcane. Mazza-Mirri is too old to sing now, but she honors you all the same."

Speaking to her after talking to Vastarie:

"I had almost lost hope for dear Shando-ri. Your witch shows great kindness in trying to save him once more.
Do not fear, child. This will work. It must."

"My children. Did you see them? Shando-ri never lost faith, as I did. He did not give in to fear or doubt even as the stones fell around us. Arum-Khal … my boy.
Be gentle, Khenarthi. Be merciful, Azurah. My children are coming home."

Speak to her after the quest:

"You wield our most sacred weapon now, my child. Walk the path with kindness, humility, and compassion. But in times of darkness, do not hesitate to mete out Azurah's wrath.
Redemption waits on the far side of war. Arum-Khal is proof of that."