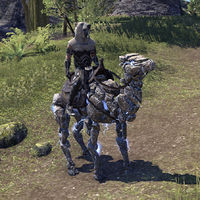 A mounted Storm Atronach in the form of a camel

Levinace is a pocket realm of Oblivion. It is the home of the Storm Atronachs.[1]

It might be assumed that Levinace is a 'collective realm' similar to Infernace, created as an extension of its Storm Atronach inhabitants. If so, the realm would be rather mundane and uniform in appearance.[2]

Levinace is well known to all conjurers due to the ability to summon subservient atronachs from the realm.[3] Summoned Storm Atronachs are usually compelled to take a roughly humanoid form, often for combat purposes. Sufficiently skilled conjurers can compel atronachs from this realm to assume any number of exotic forms, such as for use as summoned mounts. Corvus Direnni is famed as a pioneer in this field.[1][4]