Bogdan's seat of power in his realm 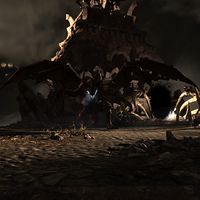 Nightflame was a pocket realm of Oblivion specializing in shadow- and fire-based magic. It served as the seat of power of a powerful Daedric Titan, Bogdan the Nightflame.[1] The realm consisted of Daedric ruins enclosed entirely by stone, with few holes in the walls allowing for a minute amount of sunlight to shine through. The ruins are layed out and sometimes built upside-down onto surfaces in such a way that did not seem to apply to the laws of gravity, being filled with countless bone remains that were frequently found in the realm, and even incorporated into the structures.[2] The creatures under Bogdan's command were said to be so powerful and great in number that they could provide a whole army capable of ending the Alliance War.[3]

As a realm surrounded by darkness, the creatures within are bound to the shadows and thrive on despair. They are not easily bound to the will of mortals, with few having the depth of character to bring these shadow creatures to heel.[4] The Shadow Tendrils of the realm appeared to be mysterious tortured souls enslaved by Bogdan,[5] which were capable of draining the life out of their targets.[2] The rare Nova Tendril daedra, beings made of pure light, were also seen in the realm serving as healers to Bogdan. Dark varieties of powerful spriggans served Bogdan, such as daedric lurchers, the shadow spriggan Dark Root, and the shadow lurcher Murklight. The realm was also inhabited by largely fire-based Daedra such as Dremora, Scamps, and Daedroths, and other various Daedra such as banekin and winged twilights.[2]

During the ongoing Alliance War in 2E 582, Canonreeve Oraneth of the First Aldmeri Dominion sought to put an end to the severe loss of Altmer soldiers in Cyrodiil. Unable to convince her Thalmor contemporaries of her plan, she turned to Bogdan the Nightflame for his aid and made a pact to bring his army of shadows to Tamriel before year's end.[3] To accomplish this, she had to construct three altars in Tamriel (with nine bones from nine different beasts in each one) and one in the Daedric realm as to link it to Mundus,[6] choosing to base her operations out of the Elden Hollow necropolis beneath the Elden Tree.[7] Oraneth hired the Darkfern clan of Wood Orcs, led by Akash gro-Mal, to unearth the many skeleton remains within the Elden Hollow.[8] Her plan was to use Bogdan's army to end the Alliance War and lead a new Altmeri empire,[9] with Akash as the leader of Orcish footsoldiers. Oraneth brought in a full contingent of Thalmor justiciars, raising concerns around why they would venture into a graveyard,[10][11] forcing Oraneth to attempt to keep the operation secret.[12] A group of guild mages consisting of Bakkhara, Dracien Montue, and Speaks-With-Light came to the Hollow to investigate, discovering the nature behind her plans. With the help of a group of Undaunted warriors, Oraneth and her minions were defeated and three of the altars were destroyed.[7] However, as the last one remained within the realm,[10] Oraneth's ritual could not be stopped and sucked Bakkhara and Dracien into the realm in an all-consuming darkness.[7][5]

A vast darkness came to blanket Elden Hollow from the dark magic unleashed by the death of Canonreeve Oraneth, filling it with Daedra and making it unsafe to traverse.[5][13] Another expedition of guild mages, led by Bakkhara's brother Kargand, came to the Hollow to investigate the disappearances of Bakkhara and Dracien.[13][14] Kargand entered the realm to search for his sister,[13] but was captured and tortured after crossing through, possibly for longer and harder than Bakkhara was because of the way time works in Oblivion.[2][10] The Undaunted entered the realm through a portal and found Bakkhara, who said Dracien was killed by the Daedra to mock her. She was tortured using by the Dremora in an attempt to destroy her the mind and body together, pushing her soul against a great fire and separating her consciousness, with the Daedra controlling what was left and leaving unable to differentiate between memory and delirium.[10] The Undaunted killed the Shadow Guard traveled through the portal they were guarding, arriving at the seat of power of Bogdan the Nightflame, who was holding Kargand hostage and guarding Oraneth's final altar,[2] believed to be what sustained the realm.[10] The Undaunted killed Bogdan and Bakkhara destroyed the final altar, and causing the realm to collapse.[2] Upon arriving back in the Elden Hollow, Kargand was revealed to have been possessed by Bogdan,[13] leaving the mages and undaunted the choice of whether to mercy kill him out of safety or allow him to recover his consciousness.[2][10]