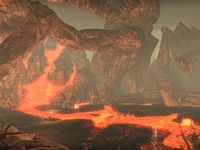 Sadal's Prison is a small pocket realm of Oblivion, created by the Chimer to imprison Sadal, one of the Brothers of Strife. It can be entered from the caldera of the Tormented Spire in Varanis.[1] It is a realm of lava and rock, scattered with Daedric ruins.[2]

In 2E 582, Tanval Indoril attempted to free Sadal from his prison following the death of his son at the hands of the Daggerfall Covenant invaders.[3] The forces of the Ebonheart Pact followed him to the Tormented Spire and talked him out of it. A small force including Tanval then entered Sadal's Prison and defeated him, allowing Sadal's flame atronach guardians to bind him anew. Tanval was slain in the battle after sacrificing himself.[2]