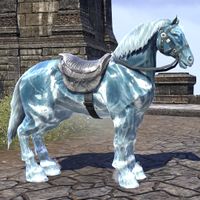 The Fourth Sinus of Takubar (also known as DOP 9497.15, called Takubar for short) is a pocket realm of Oblivion, and the home of the Cold-Flame Atronachs. It is a realm of extreme cold, where the material bonds of the bedrock slide apart to flow like lava. It is the inversion of Infernace, a realm of extreme heat. Takubar was discovered by the denizens of Coldharbour after Molag Bal banished common Flame Atronachs from his realm.[1] Frost Mares are theorized to originate from this plane.[2] Corvus Direnni theorized that the Frost Senche-Panther may be a form of atronach summoned from Fourth Sinus of Takubar.[3]

It can be assumed that Takubar, like Infernace, is a 'collective realm', a highly organized realm of Oblivion created not by a single Daedra, but as a collective extension of its numerous, less-powerful inhabitants. This type of realm is considered relatively exceptional, although they're also rather mundane and uniform.[4]