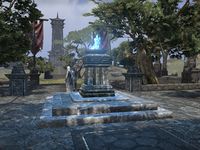 The Transitus Network is the chief means of long-distance travel in Cyrodiil, by means of the Transitus Shrines located in each of the Alliance-controlled Keeps. Wayshrines also exist, but only in the Border Keeps, and their purpose is to facilitate travel back to the PvE areas outside of Cyrodiil.

Each of the nodes on the network is connected by a link. If two nodes are controlled by the same Alliance, and neither is currently under siege, then members of that Alliance may use the Transitus Shrines within those locations to travel instantly between nodes, or to any other nodes where a completely connected path exists. Certain links are only usable by the home Alliance of a territory; that is, the faction which initially controls that territory. There are six types of nodes on the network: 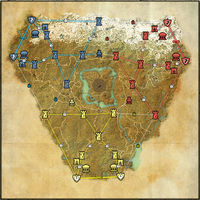