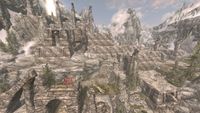 Skuldafn is an ancient temple complex located high in the Velothi Mountains in Eastmarch. It was built by the Dragon Cult in the Merethic Era, and is revered by the Nords. The ruins contain a portal to Sovngarde, which allows mortals to enter the realm without dying.

During the time of the Dragon Cult, a Dragon Priest named Nahkriin ruled over Skuldafn. After the Dragon War, the temple fell into ruin, and Nahkriin and his followers were entombed within. At some point, the Dwemer city of Mzulft, located far to the west, built a surface entrance at Skuldafn, although the passage later collapsed.

Around 2E 578, Flaccus Terentius and Holgunn traveled with a group of Nords to various landmarks in Eastmarch including Skuldafn, where Holgunn forbade them from entering the temple.[1] That same year a group of adventurers fought the Draugr at the tombs of the ruin.[2] Jorunn the Skald-King was known to treasure Skuldafn, and had intended to convene a Moot there after his rise to power. In 2E 582, Jorunn's brother Fildgor Orcthane attempted to usurp the High King's throne. Fildgor planned to fuse his soul with that of his dead sister Queen Nurnhilde, so that the Crown of Freydis would legitimize his right to rule. To do this, he brought both the Crown and his sister's corpse to Skuldafn, and used his royal blood to enter Sovngarde unhindered. His allies, the Stormfist Clan and the Orc tribes, fortified Skuldafn in preparation for Jorunn's attack.[3] With the support of the Ebonheart Pact, Jorunn successfully stormed the ruins and prevented Fildgor from completing the ritual. A Great Moot was then held at the summit of Skuldafn to solidify the Pact.[4]

At some point following Fildgor's occupation, access to the ruins by foot was completely cut off, leaving Skuldafn isolated. With the return of Alduin in 4E 201, Nahkriin and his draugr followers rose from their slumber, and dragons flocked to the ruins. After his defeat by the Last Dragonborn atop the Throat of the World, Alduin retreated to Sovngarde through the portal in Skuldafn, where he devoured the souls of the dead to regain his strength. The Dragonborn followed him, flying to Skuldafn on the back of Odahviing and entering Sovngarde for a final battle with the World-Eater.[5]