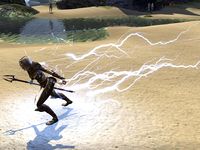 Bolt Escape causes you to teleport several meters forward, stunning all enemies at your starting location. Streak will also damage and stun all enemies along the path of travel, while Ball of Lightning absorbs any projectiles while traveling and for a few seconds afterwards.