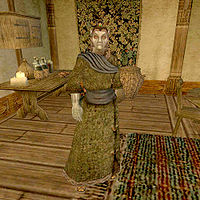 Folms Mirel, a Dunmer enchanter, is the head of the Caldera Guild of Mages. He is one of the people who will let you join and advance in the guild. However, he has no unique quests and is of little relevance in the regular game.

If you have installed the Master Index official plugin, however, he will send you on a quest to collect the ten Propylon Indices, and once you've completed it, you can talk to him to be transported to any of the ten Dunmer Strongholds. Other than that, he provides Enchanting services, as well as having a selection of magical items for sale, but only for guild members ranked as Conjurer or higher. He has some of the rarest scrolls in the game.