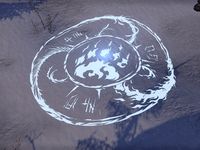 Frozen Gate creates a trap on the ground that will teleport an enemy directly to you and Immobilize them for a short time. The target will still be able to attack, but not move. Only one portal may exist at once, and casting a second one will remove the first. This is a good way of breaking up groups of enemies, as the target's allies may not immediately attack, or they may take a while getting to you, so it's best to use this on ranged attackers such as spellcasters or archers, as melee attackers are likely to approach you anyhow once they notice you. This can be a useful tool as an alternative to Taunting for a tank build, especially with the Frozen Device morph which reduces all damage dealt by the affected target. Alternatively, you can choose Frozen Retreat, which will allow your allies to use the portal as well via the

​ Icy Escape. This is more useful for healers, to keep allies in the same area so that they are easier to cast healing and buffs on. In either case, the portal disappears after a single use.