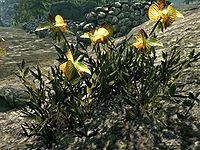 Dragon's Tongue is a conspicuous yellow-flowered plant found growing in Eastmarch's volcanic tundra. It is also sometimes grown as an ornamental plant.

It is one of only three (four with the Dragonborn add-on and five with the Rare Curios Creation) ingredients with a Fortify Two-handed effect.

In terms of combinations of two ingredients, Dragon's Tongue can be combined with 26 other ingredients.

44 guaranteed samples can be found in 26 different locations. Locations with multiple samples are:

There are 606 dragon's tongue plants in 27 different locations. Locations with the greatest numbers are: