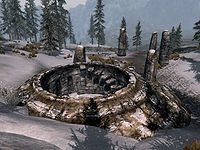 Volunruud is a medium-sized Nordic ruin containing a word wall for the Aura Whisper shout, as well as the treasure and dead body of the Tongue Chieftain Kvenel. It has an exterior and two interior zones, Volunruud and Volunruud Elder's Cairn.

This ruin is supposedly the final resting place of one "Tongue Chieftain Kvenel", among others. Replicas of his two weapons are the key to his burial chamber. A man named Heddic, according to his notes, attempted to find Kvenel's tomb, presumably for the treasure and historical significance. However, Heddic met his untimely end at the hands of the dead "living" in the ruin.

There are several large standing stones to the east of the barrow. An unlocked chest is in an alcove on the left side, and to its right is a burial urn. Farther to the right in another alcove are two more burial urns. Climb the side of the barrow and descend the curved stone stairs, marked at the top by an unlit candle on a stand. Under the top of the stairs is another unlocked chest, and to the right of the entrance in an alcove is another burial urn.

Upon entering, there are stairs leading down to the north, with a landing a few steps down with the corpse of Heddic lying on the ground. To the left of the body is a throne with a slumbering skeleton sitting in it. The skeleton will become aggressive if disturbed, so it is best to kill it in one hit. Beside Heddic's body on the ground are three loose gold coins, an iron dagger, an iron helmet, and Heddic's Volunruud Notes. Reading these will initiate the quest Silenced Tongues.

Following the stairs down past an ancient Nord battle axe, you come to a room with four exits, located to the northeast, north, northwest, and southwest. Around the room is some rubble, an empty cart, a pickaxe, various human and animal bones, and a lit brazier to the east behind a rock pillar. In front of the exit to the southwest is an iron ore vein on the floor. Ignore the path up the stairs to the north for now. 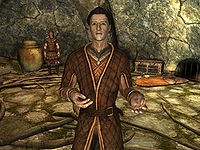 Head back to the main room, this time taking the exit to the northwest. Proceed down a short corridor to an unlocked iron door. Opening the door will reveal a crypt area, with alcoves along the walls for the dead. From your left following the wall around, the second and fourth alcoves contain draugr that will arise if they detect you. Above the second draugr some hanging moss grows, and to the right are stairs leading down to the northeast. At the bottom of the stairs are alcoves on your right. There is a slumbering draugr in the second alcove. There is a doorway opposite with a path that heads down an earthen ramp to the north-northeast before turning back on itself. There are a couple draugr patrolling up and down; the second draugr is a magic user. Once they have been dealt with, proceed down. After the switchback, there is an iron ore vein to the left on the wall. At the bottom, there is an unlocked iron door to the northwest.

Through the iron door is a small room with a leveled draugr sitting in a throne against the north wall. To the left of the throne is an open upright sarcophagus with another leveled draugr. As soon as you enter the room, the standing draugr will awaken and start looking for you. As soon as you attack, the draugr on the throne will rise and join the fight. There are seven pressure plates scattered around the room that trigger short spikes to thrust upwards from their center, causing minor damage. In the western corner of the room and to the northwest are two short caved-in areas with nothing of interest. At the rear of the room are many lit candles on stands. On the left arm of the throne is a copy of the One-handed skill book Mace Etiquette, and above the throne is a ceremonial axe, one of two replicas of the two weapons carried by Kvenel the Tongue that are needed to unlock the door to the Elder's Cairn. Return to the main room the way you came.

The path to the northeast twists and turns and leads to a multi-leveled room. You enter the room on a balcony area directly opposite another balcony with two draugr standing on it. In front of you is a wooden ramp down to the main room. A stone walkway can be seen overhead. The room below is empty, except for a spike wall trap and the pressure plate that activates it just before the corridor to the northwest; bone chimes hang in front of this corridor. Avoiding the pressure plate and bone chimes, continue northeast through the corridor, up a short flight of stairs, and through an open gate into an area with a lit brazier on your left. Human bones, a pickaxe, and an iron dagger can be found scattered around the floor. There is a corridor to the southeast, and another corridor in the northern corner heading back to the southwest.

The path to the southwest heads up some stairs and comes out onto the balcony you observed earlier with the two draugr. There are no items of interest here except the draugr you likely killed with ranged weapons from the other side. The path to the southeast climbs a set of stairs, widens as it turns to the southwest, then climbs two more flights of stairs, where you will find a magic-using draugr patrolling up and down. At the top of the stairs, the path turns to the northwest and crosses the stone walkway over the previous empty room. When you reach the other side, you will enter a small catacomb area facing an ancient Nord helmet on a pedestal surrounded by candles on stands. A draugr rests in an alcove on your right, and will awaken when you enter the room. To the northeast is an unlocked iron door.

Through the door, you will find a short ramp flanked by two statues leading up to a platform overlooked by a large stone head. Behind the two statues are upright sarcophagi, with a third horizontal sarcophagus under the stone head. As you pass the upright sarcophagi, they will open and release hostile draugr. Once the draugr have been dispatched, you will find the ceremonial sword needed to open the Elder's Cairn door resting in the third sarcophagus, together with the remains of a skeleton.

Return to the main area with both ceremonial weapons and head north up the stairs to the Elder's Cairn door. Just before the door is a stone table holding a random shield, a salt pile, and a bowl of troll fat. Activating the set of double doors places the ceremonial weapons directly into the two doors, with the sword on the left and the axe on the right, and unlocks access to Volunruud Elder's Cairn.

You enter this area at the top of a corridor, with a lit brazier on your right and a pickaxe on the floor. Follow the path as it slopes down to the north, passing a burial urn on your left and a large urn on your right. You will be able to hear the music and noises for a word wall all the way down and along the corridor. Through an arch is a cave-in on your left; to the right where the path jogs is a burial urn, a large urn, a bookcase, and a fireplace with a burnt corpse and a salt pile in front of it. The bookcase holds copies of two random common books, a random potion, an embalming tool, and several ruined books. Underneath the burnt corpse is a scroll of Ice Storm. 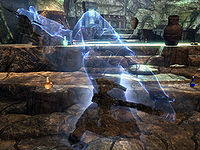 As you continue along, you will see a broken brazier hanging down on your left. Just behind and above this brazier is a stone walkway, with a draugr guarding the area. Continuing ahead to the north, you enter a tunnel that turns to the east. As you approach a lit brazier on the right, a leveled draugr will be alerted and start looking for you. The path will then open into a cavern, with a throne on the other side to the southeast occupied by the ghostly form of Kvenel. He will attack as soon as you are detected. There is a boss chest to the left of the throne on a raised area, while to the right of the throne is a sarcophagus from which a magic-using draugr will rise to assist Kvenel. The draugr may summon a frost atronach. Once you have defeated these enemies, you may need to search Kvenel twice to get both unique weapons: Eduj, a frost damage sword, and Okin, a frost damage war axe.

On the ground on the bottom step of the raised area are two potions, one an elixir of true shot, and the other a potion of resist magic, while farther up of the third step is a potion of plentiful stamina. To the right of the steps leading up to the throne is a potion of resist fire, and on the left arm of the throne is another leveled potion. The boss chest is unlocked. Inside the sarcophagus to the right of the throne and chest are two potions, one a potion of light feet, and the other a potion of brief invisibility. There are also two ancient Nord greatswords and an iron warhammer on the ground just in front of the sarcophagus. Finally, a large urn is found among some rubble by the wall to the northeast. The fighting with Kvenel can alert a further draugr to come to his aid from the west.

Once the fighting and looting are finished, proceed to the west. After climbing a few stairs, there is a word wall for the Aura Whisper shout on your left, and more stairs climbing further to the north. Ascending these stairs, you will pass a burial urn and a large urn in the middle of the stairs. At the top, the path crosses the stone walkway previously seen from below. In front of you is an unlocked chest, a large urn, three burial urns, an ancient Nord battleaxe, a random shield, a random helmet, a dragon priest dagger, and a copy of A Minor Maze. Once you have looted everything here, return to the walkway and face south. Using Whirlwind Sprint or careful jumping, you can reach a small ledge with another unlocked chest.

There is no shortcut or back exit out of Volunruud.