Containers are interactive objects that can contain items, or be used to store items in Skyrim. There are a variety of different containers in the game, most of which initially hold loot appropriate to the container's style and location. Some containers may contain valuable treasure or gold, while others may only contain food or non-valuable clutter. Any container that contains nothing has "(empty)" after its name, letting you know that you do not need to bother searching it.

However, most containers in the game are not safe for long-term storage, as stated in a loading screen:

Items can be stored safely in any containers in your own home. But items kept in any other containers may not be there later when you go to retrieve them...

Most containers will respawn if you leave the area for multiple days (in most cases, ten days, but the exact number depends upon where the container is located). Any contents left in a container when it respawns will disappear and be permanently lost. The Safe Containers section of this article provides details on which containers can safely be used for long-term storage, without risk of losing your stored items.

Note that these types of containers customarily respawn, however there may be exceptions to the rule.

Apothecary's satchels are small leather containers, often found near Alchemy Labs, that contain alchemy Ingredients and/or Potions. There are actually three different types of satchel (all identically named), each with different quality and number of ingredients:

Barrels are one of the most common types of containers, found in homes, shops, towns, and many dungeons. In addition to barrels that act as containers, there are also static barrels that are purely decorative; the latter type of barrel is slightly darker in color and cannot be activated. There are several different types of standard barrels, which contain different items (although they are all identically named).

Variants: These look identical to standard barrels, but have different names, allowing their contents to be more easily identified.

Chests may be locked or trapped.

Egg Sacs contain the eggs of Frostbite Spiders, and can be found in some dungeons.

Knapsacks are less common and are usually found near adventurers and hunters (dead or alive), near skeletal remains, as well as in bandit campsites. There are two types of knapsacks in the game, and the Dawnguard add-on adds in a third.

While most Large Sacks in the game are actually non-respawning, visually distinguishing them from those that respawn is impractical (the models are nearly identical).

Pods are common containers that can be found throughout Apocrypha. Loot found in pods include:

Satchels are a less common type of container, and are in the form of a small leather pouch. Loot found in satchels include:

The Dawnguard add-on adds three more types of satchels into the game. They contain similar loot as listed above, but with slight differences.

Small Sacks are used in homes, shops, and dungeons to store food, similar to Large Sacks but less common.

Urns, including Burial Urns, are found throughout Nordic Ruins. Some urns are always empty. All other varieties of urns contain each of the following:

Vessels are equivalent to boss chests and can be found in Apocrypha. Loot found in vessels include:

There are many corpses in the game which are considered to be containers in game data. Unless otherwise noted, all of the containers listed here do respawn with the cell in which they're located. Dead NPCs are not found here and are listed at their category instead.

Burnt corpses are charred bodies which are commonly found in dungeons, sometimes lying over fire pits or inside hanging cages.

Desecrated corpses are bodies of unfortunate soldiers of the civil war, found in only two locations in the game. They do not respawn.

Dessicated corpses are the bodies of unfortunate victims to frostbite spiders, found wrapped in spiderwebs in various dungeons throughout Skyrim. They have a 75% chance of the following contents:

In addition to living draugr, many dungeons throughout Skyrim also contain the corpses of draugr which can be looted. There are ten versions, all of which carry the following contents:

Various inanimate Skeletons are found across Skyrim and Solstheim, usually the long-dead victims of bandits, animals, Ash Spawn, or natural disasters. They will usually have a small amount of Gold, with a chance of Bone Meal. Only some intact skeletons can be looted, and half-buried or disarticulated ones cannot be interacted with. A few skeletons of deceased NPCs will carry the journals or other special inventory items they had in life, such as Drokt or Gratian Caerellius.

Containers may be safe for one of two reasons. Some container types are set to be non-respawning—containers of that type will never respawn, no matter where the container is found. Other containers are safe because of their location—some locations, in particular the player's houses, are identified as non-respawning locations. All containers in these safe locations (even common Barrels and Sacks) can safely be used for storage.

Child's Chest is a part of child's bedroom. It will be empty if you haven't adopted any children. Your children may collect various things and store them in their chest. Their older weapons, clothes and dolls will be kept in it too, if you give them a new one. Your children will restock it every few days. However, the original contents in it won't disappear.

Coffins are found in Halls of the Dead and Vampire Dungeons. Most coffins are always empty. However, one variety of coffin has a 75% chance of containing one of the following:

Whenever a citizen of a hold dies, the items that they were carrying, such as keys, clothes, and weapons, will appear in a coffin in the Hall of the Dead of the hold capital. These items will then be free to take without consequence.

Cupboards are common furniture in houses. Different types of cupboards appear in common houses, upper-class houses, and noble houses. Some models have shelves on which additional items may be placed. The interior contents of cupboards are:

Most frequently seen in houses.

In addition to being a safe container, the Pot can be picked up and moved (although not between zones or fast traveling). This can permit you to place a safe container at any outdoor location, or move weight beyond their carry limit. Places where a Pot can be found include:

Ironback Hideout
Pale Imperial Camp
Winterhold Imperial Camp
Eastmarch Imperial Camp
At a horker hunting camp at the bottom of a gully north of Snow Veil Sanctum and south of Bleakcoast Cave
At a dead woodcutter's camp on a hilltop between Honeystrand Cave and Geirmund's Hall
Lake Ilinalta on a fisherman's island in the south center of the lake (owned). 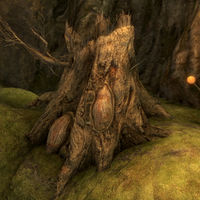 Found in the Solitude Sewers.

Not to be confused with Large Sack or Small Sack.

Safe locations are places that never respawn. Therefore, every container in the location (even a common barrel or sack) is safe for storage. The primary example of a safe location is a player-owned house, but a large number of other places are also non-respawning. Unless noted otherwise on the place page, only the interior areas of these locations are safe—i.e., only regions that are entered through a door that triggers a loading screen, and have their own map, separate from the exterior map.

In a few instances, there may be quest-related changes to the location (as noted on the individual place page), but otherwise the game does not modify the contents of a safe location.

All safe locations are listed in the Safe Locations category.

The merchant chest is a standard container, but it is intentionally hidden to prevent players from accessing the chest. On the PC, using the tcl Console command generally allows the merchant chest to be found, most commonly under the floor of the merchant's store. The existence of this chest is not a bug, an easter egg, or in any way noteworthy—it is a standard part of game mechanics that is not visible as part of standard game play.

A container's inventory list is sorted in this order:

As many corpses can be picked up and carried around, they can effectively become portable containers, allowing you to potentially carry an unlimited number of items around and remain unencumbered. The speed at which you can carry the corpse appears to be related to its size, so small corpses like hawks work well in this capacity. It is worth noting, however, these portable containers should not be considered safe, as their contents may be deleted if left for a long period of time. A "Pot" is a portable Safe Container. Followers work as a portable container as you can place all non-useful items into a chest or container and ask them to take everything in it--using this method your follower has no weight limit and isn't slowed down. (Warning: using this method may cause all such items to become flagged as 'Stolen' when you try to reclaim them.)