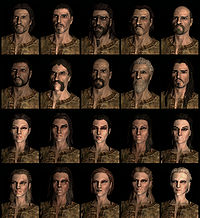 A compilation of the preset Imperial faces available in Skyrim.

Illustration of a typical Imperial male

Natives of Cyrodiil, they have proved to be shrewd diplomats and traders. They are skilled with combat and magic. Anywhere gold coins might be found, Imperials always seem to find a few more. They can call upon the Voice of the Emperor to calm an enemy.

Imperials' skill bonuses are perfectly balanced between a mage type character and a warrior type. They have lesser bonuses to the Heavy Armor and One-handed skills, but also have bonuses to their Destruction and Restoration skills, making either path, or a combination of the two, equally attractive. Despite the Imperials' reputation as diplomats and businessmen, they receive no bonuses to Speech in Skyrim. This is a departure from other titles where Imperials are heavily favored toward speech and bartering.

The Voice of the Emperor greater power is useful at most levels. The magnitude is high enough to affect everyone in the vanilla game until level 81+. The calmed enemies can also enable you to use the wait feature to fully restore your health, magic, and stamina (you may consider waiting a full 24 hours, so you can use the Voice power again if needed).