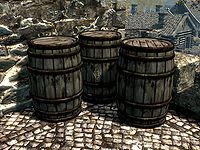 Thief caches are barrels that appear in various places around Tamriel as you progress in the Thieves Guild quest line. They often appear near other barrels, but can easily be distinguished from them by the Thieves' Cache shadowmark (

) on their side. The first three appear in Riften after you first join the Thieves Guild. After that, three barrels appear in each of the appropriate cities as you complete the various reputation quests.

The barrels contain significant loot and will respawn if the player leaves the town for at least 10 days completely. If entered within that period, the timer will revert to zero.

An additional barrel is available with the Dragonborn add-on.