The Lady of Infinite Energies, Meridia, is a Daedric Prince associated with the energies of living things. She is known for her hatred towards the undead of any kind. While the shrines for most other Daedric Princes in Skyrim have been hidden away in remote areas, Meridia has been given an accessible and fully intact shrine with a temple underneath. Recently, a foul darkness desecrated the temple and as such, Meridia is looking for a new champion. There are two ways to begin the journey towards becoming her champion: either find Meridia's Beacon or find the shrine. 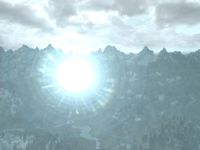 When you arrive at the shrine with the beacon in hand, the otherworldly voice will echo through the woods once again, saying, "Look at my temple, lying in ruins. So much for the constancy of mortals, their crafts and their hearts. If they love me not, how can my love reach them? Restore to me my beacon, that I might guide you toward your destiny." Place the beacon in the gem pedestal as instructed and a giant ray of light will shoot towards the sky, transporting you high above Skyrim. Meridia will then show herself in her true form—a blinding ball of light—and will speak to you:

"It is time for my splendor to return to Skyrim. But the token of my truth lies buried in the ruins of my once great temple, now tainted by a profane darkness skittering within. The Necromancer Malkoran defiles my shrine with vile corruptions, trapping lost souls left in the wake of this war to do his bidding. Worse still, he uses the power stored within my own token to fuel his foul deeds. I have brought you here, mortal, to be my champion. You will enter my temple, retrieve my artifact, and destroy the defiler. Guide my light through the temple to open the inner sanctum and destroy the defiler." At this point it is possible to ask about the artifact, but in any case Meridia will send you towards the ground with the words: "Malkoran has forced the doors shut. But this is my temple, and it responds to my decree. I will send down a ray of light. Guide this light through my temple and its doors will open." 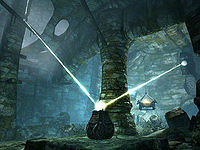 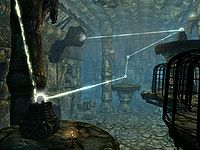 Once inside the Kilkreath Temple, the profane darkness is palpable everywhere as a thick, black fog oozes through the corridors and a burned desecrated corpse welcomes you. Proceed through the first corridor and notice the locked door on your left. It leads to a handle which opens the adjacent gate and gives access to some minor loot on the other side. Take the eastern path and face the first huge chamber. Meridia's ray of light will shine down through the ceiling onto a pedestal. Activate the pedestal and the beam of light will be directed onto a device placed above the eastern tunnel.

When you follow the light, however, enemies will start to emerge. Dark shadows called corrupted shades will attack in hordes, trying to prevent you from bringing light to the temple. Dispose of them and enter the next chamber, then activate the pedestal to direct Meridia's light further into the depths of the ruin. The eastern path is blocked, so locate the narrow tunnel to the south, dispose of even more shades, and open the wooden door. Follow the tunnel until you see a chest, then take a left and enter yet another huge chamber with multiple paths and levels. The beam of light and the pedestal are located above, so head up the set of stairs to the right, notice the locked door (key required), then take a running jump to the ledge and activate the pedestal. The light will now point in a northern direction, so follow it to find an arcane enchanter and a locked door, once again giving access to a room with minor loot. Backtrack over the bridge where the door now will be unlocked. Go through it for a breath of fresh air. 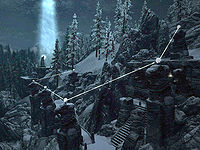 Once outside, you will notice your efforts have made six pillars light up, but there is still work to do. At the bottom of the stairs leading up to Kilkreath Ruins, to the right, is an expert-locked chest. Locate and enter the door leading to Kilkreath Ruins. Head up the stairs and enter a huge chamber with multiple levels and more corrupted shades. Kill the opponents and start your investigation by heading left into the chamber. The ground level has a few urns and an altar with another desecrated corpse on it, beyond a locked door (key required). Head back to the stairs near the entrance. At the top of the stairs is yet another door that needs a key, so go ahead and activate the first pedestal. This will open the east door behind you. In the first room down the corridor, there is a (spear trapped) door hidden in the shadows on the right. A desecrated corpse lies in the doorway, and the room contains a chest with minor loot. The main passage will lead the way to a lever (beware of the tripwire with swinging blades on your way). Pull the lever and go south over the bridge. Follow it until you reach an intersection, then take a right turn for the Block skill book Battle of Red Mountain.

Backtrack to the intersection and make a running jump to the pedestal. Activate it, see the light shine towards a platform above, then jump back to the intersection. Make a running jump towards the now open western door and follow a tunnel to battle even more shades. You are now in a room with stairs leading up on both sides. The western one leads to a potion on a weight sensitive plate, the eastern one leads to a tunnel. Follow the tunnel and you will reach the last of the lighting pedestals. Activate it and the beams will be complete, opening the door at the ground floor of the previous chamber, leading to Kilkreath Catacombs.

A New Day is DawningEdit 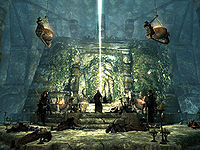 In the catacombs, make your way to the last pedestal and activate it. This will turn on the final beam of light, open the nearby door, and awaken Malkoran, the necromancer responsible for Meridia's wrath. Don't forget to loot the minor treasure chest in the corner, as the door will shut behind you with no turning back. Your journal will update when you reach the final chamber and it is now your objective to kill Malkoran. He is protected by six corrupted shades and is a strong opponent who uses frost spells from a distance, so use the columns to your advantage. When Malkoran is dead you will have to face his shade, so be aware. When all is said and done, Meridia will speak: "It is done. The defiler is defeated. Take Dawnbreaker from its pedestal." Loot the room before you retrieve the sword, as you will be transported outside as soon as you take it. When you finally retrieve the powerful sword, everything will turn into light and you will find yourself high above Skyrim once again, facing Meridia: "Malkoran is vanquished. Skyrim's dead shall remain at rest. This is as it should be. This is because of you. A new day is dawning. And you shall be its herald. Take the mighty Dawnbreaker and with it purge corruption from the dark corners of the world. Wield it in my name, that my influence may grow." Choose the polite answer and you will get the polite final words from Meridia: "May the light of certitude guide your efforts."

Notes
* Any text displayed in angle brackets (e.g., <Alias=LocationHold>) is dynamically set by the Radiant Quest system, and will be filled in with the appropriate word(s) when seen in game.
Retrieved from "https://en.uesp.net/w/index.php?title=Skyrim:The_Break_of_Dawn&oldid=2383030"