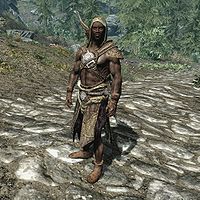 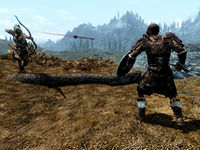 A hunter fires an arrow at a fugitive

Hunters are friendly humans who can be found in the wild, stalking and attacking wildlife such as elk. They will also help kill any wildlife you are attacking. They traverse the wilds alone or in small groups, sometimes accompanied by dogs. Hunters are automatically aggressive to most wildlife and will attempt to kill them.

They carry a hunting bow and some iron arrows, and can usually be traded with.

"I've been hunting and fishing in these parts for years."
"It's not like my poaching is hurting anyone. The Jarl can hardly eat every deer now can he?"
"There's enough for all of us if you aren't greedy."

When traveling the wilderness, occasionally a fugitive can be seen being pursued by a hunter. The fugitive will approach you and give you an item (usually rare and enchanted). Moments later, the hunter will come by and ask which way the fugitive went. You can either tell the truth, lie, or give him the item. After the conversation, the hunter will most likely find the fugitive and kill him.

The hunter will ask you, "Did you see someone run past just now?" Pointing to the fugitive will have him reply, "Great! Thanks! Bastard stole from me. I'll catch him though!" When you ask if the item is his, he will be confused, but thankful still: "Yes! How'd you get this? Never mind, here. It's not much, but its [sic] something. I'm going to track down that thief and murder him!" If you deny that you saw someone, he will say, "Well, if you do, grab him and yell. Bastard stole from me." Whichever your answer was, he will continue his chase. 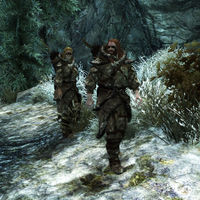 Two hunters in the wildness

A Hunter is a randomly encountered Nord. They can be found in the wilderness of Solstheim, often on small groups of two or more. They typically wear pieces of Skaal armor, including a Skaal Coat, Skaal Boots, and a Skaal Hat. 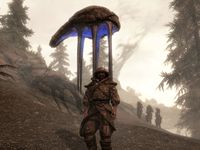 "Test yourself against the beast with us."

In one particular encounter, a group of four will be preparing to hunt a Netch. One will approach you and say:

"We have come south to test our might against a Netch, will you join us?"
What's a netch?

"The giant air-floater from the dark elf lands. Only the brave dare to hunt them, only the strong survive them. Come. Test yourself against the beast with us. We all will share in the glory of the hunt!"

Three options are presented next.

Do you think you'll win?

"A warrior expects nothing and therefore is ready for anything. If our aim and our hearts are true, the All-Maker will grant us strength. If not, today is as good a day to die as any other. Either way, they'll songs of our bravery around the campfires for many years."

"Well met, friend. May we fight or die well."

"Luck? Luck will play no part today. We will earn our victory or return to the All-Maker." 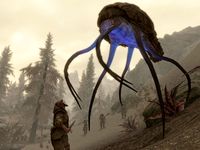 A group of Hunters attacking a Bull Netch

After this they will attack the netch. If they manage to kill the creature, they will repeat the following lines:

"Our victory will bring meat and bones to our people and glory to our families."

"The beast was strong, but we were stronger."

"They will sing stories of this day."

If a hunter should die during the hunt, the surviving members will say:

"The beast was not the only one to fall this day. May the All-Maker welcome our brethren with open arms."

"We will honor and sing praises of the fallen."

You may also encounter a hunter and their dog in the wilderness of Solstheim.

"If you've come here to hunt, there is plenty of game to be found."

"Most of the game has been driven north by the ashfall."

"If the All-Maker favors us, we will eat well for many days."

"Be wary! The reavers have camps all over the island."

"The wise hunter is cautious, always."

"We hunt not only to eat, but also to test our skill."

"May your eyes be sharp and your aim true."

"Peace and bountiful harvests to you."

"Be careful out there. Solstheim is full of dangers."

This Skyrim-related article is a stub. You can help by expanding it.
Retrieved from "https://en.uesp.net/w/index.php?title=Skyrim:Hunter&oldid=2515766"