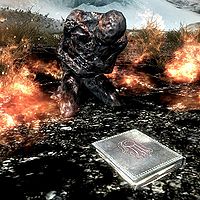 Yisra and the Flame Cloak tome

Yisra was a Redguard student enrolled at the College of Winterhold. Her charred corpse can be found in a circle of scorched earth east of Dawnstar, along the shore immediately south of Yngvild. By speaking to Phinis Gestor, you can learn she was one of several students that have gone missing recently. However, nothing seems to come from finding her remains.

Yisra's necklace and a small amount of gold can be found on her body, and a copy of Spell Tome: Flame Cloak is set before her corpse, so one can assume she got the incantation wrong. Her necklace and the tome are not quest-related and respawn after a few days.